In 2014, Mercedes-Benz introduced the third generation of SMART Fortwo on the market with internal combustion engines for specific markets and with an electric motor in 2016.

For the third generation of the SMART, Mercedes-Benz allied with Renault and built an electric version for its city vehicle. Previously, it offered other electric drive solutions since 2007, but the real deal came in 2009 when the orders for an electric-powered SMART reached 2000 units, twice as much as the carmaker estimated. In 2016, the German carmaker introduced the open-top version and offered it with an electric motor.

While most of the convertibles need more room to host the roof when it's retracted, the SMART fortwo Cabriolet doesn't. It just used the area above the trunk. It was more of a targa-cabriolet since it kept the B-pillars in place when the roof was folded. At least, it didn't feature any frame for the side windows. At the front, the electric versions featured a compact mesh-grille. It didn't need to cool any radiator since it didn't feature an internal combustion engine, and there was little need for fresh air to cool the batteries.

The cabin was fit for two occupants offering plenty of legroom. As for the headroom, the sky was the limit. Its high-bolstered seats with integrated headrest were designed for comfortable rides. They were thick and had to compensate the fortwo's short wheelbase. To remind the driver that it is an electric vehicle, it featured air vents surrounded by green trims.

Power came from an 81 hp electric motor fed by a 17.6 kWh lithium-ion battery pack. SMART considered that the 100 miles (160 km) range was enough for regular, city-traffic use. 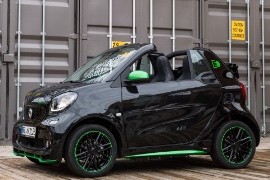