1 This DIY Mobile Office Will Blow Your Mind, Has a Levitating Desk and a Pull-Out Deck

4 This Is Not Your Average Box Truck, But a Sweet Tiny House on Wheels

5 Amazing Custom Box Truck Is Both Mobile Workshop and Tiny Home on Wheels
Car video reviews:
Up Next

Camper conversions are increasingly popular among those who'd like to live life on the road. They can turn out to be much cheaper than buying an RV, and you can basically transform most vehicles into mobile homes. While browsing YouTube today, I stumbled across a fantastic box truck conversion project that really blew away my expectations.

When people think of RVs, they typically get the image of a trailer, a van, or a bus. A slightly different type is the box truck RV, the U-Haul type of vehicle.

"Why would you choose to travel or live in a box truck?" you might ask. Well, there are several advantages. First, box trucks come in all shapes in sizes, with many big enough to accommodate the tallest of people. Second, they are widely available because they are used in many industries. Moreover, you'll probably get one for a reasonable price, especially if you buy a retired service vehicle. Third, you can create a stealthy home out of it, as most do not feature windows, and there aren't any indicators of something of value inside. So, you'll be able to sleep on a side street without worrying about ill-intended people breaking into your space.

Epic Skoolies is a conversion company based in Spokane, Washington. Its mission is to make living on the road more accessible by building "Badass Conversion Vehicles," as they call them, and they do it fast with precision and depth.

One of its projects is The Stealth Box, the ultimate stealthy and luxurious vehicle. It's built on a 1999 Ford 7.3 Powerstroke box truck with a 6'9" (2.06 meters) internal height. It sits on an E450 chassis with dualies in the back. Apparently, this specific diesel engine is sought after for box truck conversions.

At first glance, you'd probably think this is a service vehicle. Or, if you have a keen eye, you will spot a 20-gallon (78-liter) propane tank on its rear left underside, indicating something special about this truck.

Let's move on to the exciting bit – the interior. You'll find the entrance on the back of the truck. As soon as you walk in, you'll probably notice the mood lighting on the floor and two blue light switches controlling the main and floor lighting. Straight ahead, you'll see a teak wood desk with a black pipe holding it. Under the desk, there's a propane quick disconnect, where the owner can plug in a heater when he wishes to go off-grid.

Given that the box truck has no windows and the client wanted the build to be as stealthy as possible, the Epic Skoolies team had to get creative. They added a subtle RV screen window with a vent outside and a skylight to keep the air circulating. A small, latched door leading to the driver's cabin further adds to the stealthiness by hiding the living space from any curious eyes looking from outside the front of the truck.

The living room boasts two couches on opposite sides. One of them is a full XL, so it can be transformed into a full-size bed when needed, although it seems like it'd be hard to fit two people on it. It can also be lifted to reveal a generous storage space, where the owner can store their clothes and other belongings. The other couch can also be turned into a bed, and underneath you'll discover the electrical system.

The truck has a 400 Ah battery bank, a 4000 W inverter and charger, a SmartSolar charge controller connected to 800 W solar panels on the roof, a distributor, and an AC/DC panel. Regarding heating and cooling, there's a 700-800 W heater to be used on colder days and a roof A/C to cool the place up. What's more, the truck also has a water heater, a 75-gallon (284-liter) freshwater tank, and a 50-gallon (189-liter) greywater tank.

Above, there are two shelves, also held up by black pipes. A downside is that there doesn't seem to be any mechanism to hold the stuff you put on them, so things may fly off when driving.

The client wanted some entertainment options, so they added two JBL speakers under a smart TV, both connected to a receiver.

The kitchen is well-equipped, with a microwave, a large fridge/ freezer, a three-burner stove and cooktop, an oven, and a commercial-grade sink. A nice touch is the LED lighting for the oven and stove dials, which are normally blue, matching the light switches, and turn red when the utilities are in use. Plenty of space is provided in the form of shelves and cabinetry, both above and below the countertop.

Last but not least, the bathroom is massive. Given that the client is 6'5" (1.95 meters) tall, the team had to install a suitable bathroom. They went with a black penny tile wall, a 5-gallon (19-liter) cassette toilet with an electric flush, and a shower with different features such as rainfall or massage. The last touch was an LED-lit mirror. All these elements combine to add a luxurious feel to the bathroom.

This premium build proves to be stealthy, aesthetic and prepared for off-grid living. We do not know the price for such a conversion; you'll have to contact Epic Skoolies to find out more about building your dream camper. 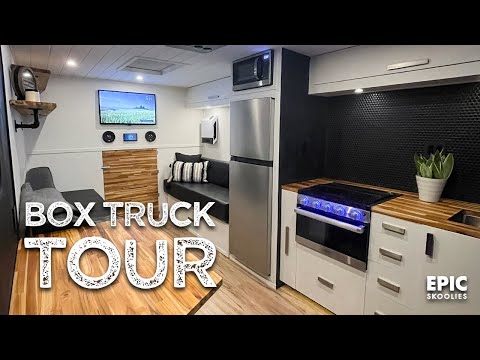