1 This Garage Is Also a Family Home, an Awesome Man Cave, and Gearhead’s Dream Come True

If you’re going to spend five full years and over $100 million to build yourself a house, you might as well make sure it has everything you could ever possibly need or want. La Fin does, and then some.
25 photos

La Fin is an exclusive, massive and very luxurious property up on a hill in Bel Air, Los Angeles. It’s been on the market for several months now, and the reason it’s having some trouble securing a buyer is the fact that it’s asking $139 million. That, and its size: at almost 40,000 square feet (3,716 square meters) of living space, it’s not exactly a family residence. Not unless your family includes an entire village of first- and second-degree relatives you’re tight with.

La Fin means “the end” in French, and the property the brainchild of developer Dr. Joseph Englanoff. It was designed as the ultimate entertaining space, with amenities like open-air gym with a wellness area, private cinema, wine cellar and an ice room for vodka tasting, and a car display unlike any other. This one includes six elevators for your supercars, allowing you to bring them up and on display right into the room – which also happens to be a nightclub with several bars, by the way.

Supercar Blondie is the latest YouTuber to be invited for a tour of La Fin, courtesy of real estate YouTuber Enes Yilmazer, who showcased it in March. You can see her reactions to everything inside in the video below. Unlike all the other video tours of this mega-mansion, at least this one keeps it honest: the place is absolutely insane! Gorgeous to a fault and jaw-dropping for its scale and luxury, but insane.

Takeaway facts from the tour: the Swarovski crystal chandelier that goes from the top floor to the basement costs $1 million, the furniture is all custom-made to the tune of $3 million, the appliances in the kitchen are an estimated $300,000, and the whole place costs $3 million a year in maintenance. For its asking price of $139 million, it doesn’t come with the cars in the six-bay display area.

Speaking of cars, though Supercar Blondie is an automotive content creator, she breezes past this important part of the house. As we noted in a previous story, the listing for La Fin mentions that the car display is a rotating one, yet not a single tour shows it in motion – this one doesn’t, either. Neither does it show the garage, or at the very least the entryway for the elevator. Since this place is so big and you can only put six vehicles in the display, a much larger storage area must be available.

That said, La Fin is an impressive piece of real estate, if only because it dares to turn the owner’s car collection into a display piece and the highlight of the owner’s personal nightclub. It’s the kind of decadence us regular mortals can only enjoy by window shopping, so here it goes. 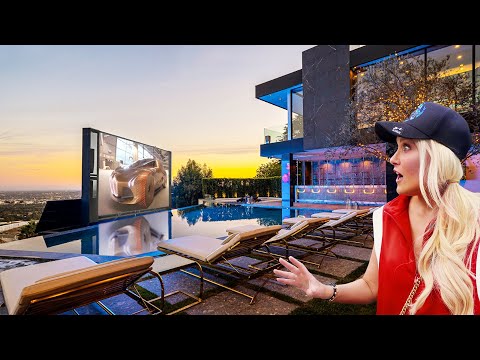