5 A Look Inside Jeffree Star’s Garage, Packed With Custom and Insane Rides
Up Next

In a world where influencing has become a full-time job and every teenager dreams of becoming an influencer through silly TikToks, Jeffree Star has been able to spin whatever attention he initially got for an actual skill into a multi-million dollar business empire. Star is now a most successful businessman, influencer, and A-lister – and he has the home to match.

Jeffree Star is best known as a makeup guru, having started with YouTube tutorials before moving to create his own makeup collections. In just a few short years, he developed his larger-than-life public persona – as well as a $200 million fortune. The latter includes a gorgeous French Normandy Estate in Hidden Hills, California. The former, is an unbridled passion for customized vehicles, preferably vintage or supercars, preferably in the craziest neon colors.

Where Star’s money and his passion meet is his Cali mansion. He’s been trying to sell it for a couple of years now, first listing it at $20 million after he bought the ranch in Wyoming, where he’s raising yak. Last month, pricing dropped to $15.5 million. If you happen to be a fellow car enthusiast with a penchant for glitzy glamour and, of course, if you’re loaded, then this might tickle your interest.

The mansion, listed with Compass, sits at the end of a cul-de-sac behind security gates and is 19,000 square feet (1,765 square meters) of pure luxury. It’s actually a compound made up of the main, three-story house, two separate guest houses, a cavernous attached garage, and a barn (for actual horses, but which can be repurposed). Both the mansion and the garage have been featured heavily on Star’s social media and on other online shows – like the Supercar Blondie episode where Star got to show off his colorful collection of custom cars.

There is a circular driveway that spills down into the garage, which can hold 10 or more vehicles as is. It offers 4,700 square feet (437 square meters) of space, and you get another 3,700 square feet (344 square meters) that you could use for the purpose of car storage in the barn. It’s accessed by a separate driveway, so this should come in handy.

During his stay at the mansion, Star’s growing auto fleet fit just fine in the garage, including his most famous Rolls-Royce, the pink $500,000+ Black Badge Cullinan that’s running for the unofficial title of the pinkest Rolls-Royce in the world, a restomodded 1965 Silver Cloud in baby ice pink, a rare glass roof 1955 Ford Crown Victoria converted from stick to automatic, a pink Lamborghini Huracan (his first-ever celebrity car), a pink Aston Martin Vantage, and a McLaren 750S that became California’s first pink license plate holder. And those are just a few of his cars – sadly, neither is included in the sale.

The mansion itself is a spectacular piece of property. Designed by architect Brian Lerman and built in 2007, it offers seven bedrooms and 13 full bathrooms, with no quarters and no halves. The master bedroom is actually comprised of several rooms, including two walk-in closets, one of which sits behind a bank vault door. That’s where you’d keep your fanciest designer duds, jewelry, and, of course, the car keys.

Amenities are of the most luxurious kind, including a home theater, a game room with a pink pool table and a pink piano, an underground wine cellar, and tasting room decked in 300-year-old barn wood, a proper spa with a massage room, sauna and meditation room, a glass elevator, two libraries slash offices, and a two-story professional gym. Naturally, there’s also a pool with a cabana and firepit, and plenty of perfectly manicured greenery.

The property screams excess and opulence, which should hardly come as a surprise considering who’s selling it, but it also has potential for customization since it’s selling unfurnished. It could be the perfect getaway for a rich car collector and his family looking to live the Cali dream in a French-inspired glamorous setting. 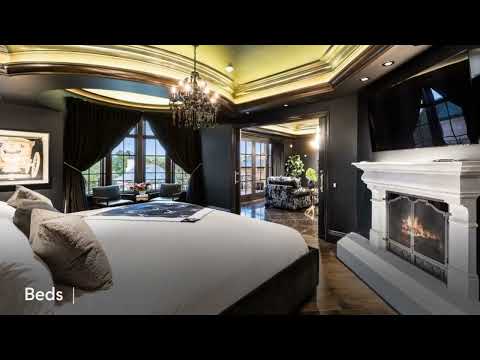 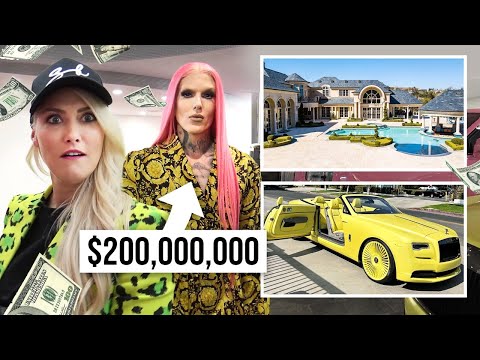