1 Can't Afford to Pay $6.1 Million for a Porsche 550 Spyder? Try This Faithful Replica

NASA Contradicts Own Artemis I Launch Timer, to Roll Out SLS in Mid-February

Gorgeous Cave Garage Looks Like a French Castle, Is a Collector’s Dream Lair

Elena Gorgan
Any James Bond villain would be jealous, and maybe even 007 himself, if he weren’t so preoccupied with saving the world. Out in Newport Beach is a private car collector with what could be described as the most gorgeous custom garage for his small but impressive collection.
10 photos

As any collector can attest, storage is always of high importance when it comes to collectibles, whether they’re stamps, gems, jewelry or timepieces, artwork, or automobiles. One could even argue that tracking down and securing the collectibles is only half the job, if you don’t have proper storage for them.

It’s a rich person’s problem, for sure, but this cave garage beautifully addresses it. We often cover high-end pieces of real estate when they feature outstanding amenities for a car collection, but this one is so impressive that it’s only famous for its garage. Part of the reason for that is that it belongs to a private collector in Newport Beach and that he’s still calling it his home.

The cave garage is the work of designer and builder Rob Glass from Glass Residential Group, based in California. The company's client list includes names like Kenny G. and Janet Jackson, Rod Stewart and Barbara Streisand, and James Brolin, but it’s not the celebrity association that’s gotten it headlines over the years. Instead, it’s the Group’s propensity for Mediterranean style or classic French, with Rob Glass standing out for his incredible designs that feature stone as the main building material, vintage wood, and iron. Considering that most people want modern, sleek, minimalist homes, the work of someone like Glass does stand out.

The cave garage shows that the hubbub around him is not for nothing. The video at the bottom of the page is a presentation from the designer himself, from 2018, when the work had been completed. At about the same time, Glass also spoke to other media about the mansion and specifically the garage, mentioning that he’d found inspiration for both in 17th century France.

The property itself is gorgeous, offering 18,000 square feet (1,672 square meters) of living surface across three floors and six bedrooms. It has a pool and a loggia, and all the modern amenities you would expect, but styled in classic fashion. The video offers some glimpses at the property, but let’s not kid ourselves: it’s the garage we’re all here for.

Halfway between a dungeon, a French castle and a museum, the garage can hold as many as 12 vehicles at one time, and features a large turntable in the middle, offering an easy way to take whatever car you want out for a spin. Though the garage is large, measuring 3,600 square feet (334.5 square meters), the turntable was necessary given the number of vehicles inside.

Building a garage like this one inside the home was no easy feat, Glass explains. It started with rounding the walls and the ceiling, and then covering them with stone reclaimed all the way from France. Then, for the floor, they used cobblestone reclaimed from the streets of Belgium. Only the fact that these two types of stone had to be imported from Europe should give you an idea of how much this cave garage must have cost – Glass is too professional to offer a price range.

The doors are custom built, too, to match the garage. Reclaimed wood was used both for the large double door that grants access inside, and for the door that connects to the adjacent lounge slash game room. A large window with steel frame allows guests inside the lounge to look out on the collection, much like they would in a museum.

Since the goal was to offer the owner the chance to put his collectibles on display, lighting is museum-like, too. There are LED lights shining discreetly downwards from wall sconces, and custom cast-iron chandeliers hanging from the ceiling. The castle vibe is strong throughout, and Glass didn’t overlook a single detail.

When you have such a collection, there’s really no sense to skimp on the garage. 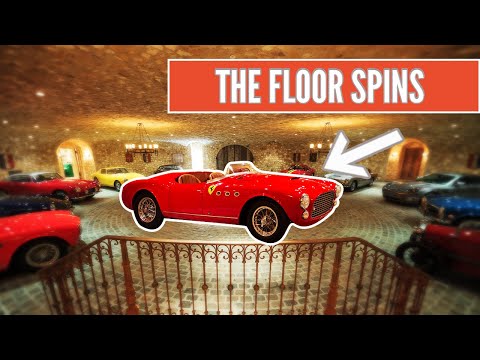