2 1991 Lamborghini Countach Is Too Cheap to Be True, Engine Bay Reveals Secret

Third-Gen Range Rover Tortured Off-Road - Will the 2022 Model Still Do This?

Land Rover claims its vehicles were – and still are – built for off-roading, but when it comes to the Range Rover, this type of scenery isn't exactly what the SUV's makers had in mind.
11 photos

The top model is meant as the vehicle of choice for the wealthy farmer and, last time we checked, farms don't usually sit on top of the mountains. The worst a Range Rover should see is a muddy field and some ruts, at which point the driver will rue the fact they forgot to switch the plush carpets with the rubber ones. Good thing the split tailgate acts as a bench and offers the best place to remove the mud-clad boots before getting back into the car.

However, this somewhat excessive care for the vehicle's wellbeing only applies to newer Range Rover models - perhaps no further back than the outgoing fourth gen, which has been around for quite some time now. A third-gen Range Rover, on the other hand, can be had for a reasonably low price, which is why people might not hold back anymore from testing the vehicle's true off-road limits.

The only relevant way to do that is by keeping the SUV stock, which is precisely what the poor Vogue getting tortured in the clip below is. No added mechanical lockers, no lift kits, and, most importantly, no off-road-worthy tires. That last bit is a little extreme considering what the guys driving the luxury Land Rover model were about to ask of it, but at the end of the day, the fact (spoiler alert) it managed to make it through only makes the vehicle's performance all the more impressive.

There were early indications the tires were going to pose a problem (when all the wheels are spinning and the car isn't moving forward, that's clearly an issue with the tires), though it wasn't necessarily their grip that got in the way in the end.

The trick, according to the people in the clip, was finding the right balance between putting enough air in the tires to withstand the pressure whenever most of the vehicle's weight switched to one corner, but not too much as to hamper the already poor grip any further. The flat they get toward the end is proof of how difficult it was to find that sweet spot, though making it through without a puncture is definitely credit to the resilience of the tires, but mostly to the skill of the driver and spotters.

So, back to the question in the title: will the 2022 Land Rover Range Rover be able to do that? Well, given just how expensive the damn thing is, we'll probably have to wait about a decade before we'll get a definite answer on that. 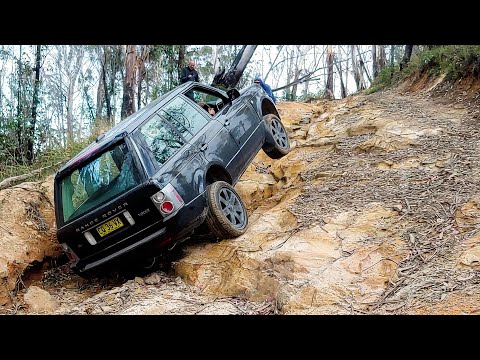