That was the swan song for the old-school Defender.

A car that was axed from the production line in 2016 and, two years later, it was rebuilt in another 150 units by the factory. It was the Defender Works V8.

The Defender was one of the most iconic off-road vehicles in the world. It was developed after WWII to work the land and to be driven everywhere. In 1948, it was named Land Rover Series I and it changed its name in Defender in 1990. It was the British Willy's if you want. But even if it didn't go to too many wars, it was there when peace was signed. After 67 years of production and over two million units sold, the Defender was retired. It didn't comply with the new safety regulations. But the R&D team started to work on surprising revenge since 2014 when they built the first prototype of the Defender Works V8.

For starters, the engineers took an already built Defender, stripped it down, and installed new technologies in it. For the exterior, they installed 18” light-alloy wheels with a special design and taller, off-road tires. The spare-wheel was kept in the back, outside the car, on the rear door. On the front, a new pair of headlights were added for better light on the road.

Inside, the 70th Anniversary model featured Recaro sport-bucket seats for the front passengers. The rear, side-hinged benches were kept just in case someone would need to stay there. On the center stack, there was a new infotainment unit, with navigation and a better sound system.

The technical department was improved with the implant of a 5.0-liter V8 gasoline unit taken from Jaguar. The 8-speed automatic transmission sent its power to all four wheels. All the 150 units were re-worked Defender. 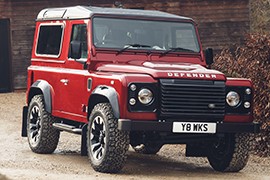