2 First-Year Chevrolet Camaro Dreams to Be an SS, Looks Retro with All the Rust

4 Letty's Chevy Corvette Gets Restored, Is a Fate of the Furious Miniature

The World’s First Drivable Truck Made of Ice, a Chevrolet Silverado 2500 HD

Elena Gorgan
It’s difficult and expensive to pull off memorable ad campaigns – just look at the kind of budgets that go into the making of the Super Bowl ads. But pulling off a campaign that ends in the creation of a functional work of art is one level higher.
22 photos

Since November is autoevolution’s Chevrolet Month, let’s have a closer look at the Chevrolet truck that wrote history in the winter of 2013, when it became the world’s very first ice truck. As in, a truck made of ice. Drivable, road-legal and very practical, to boot.

This Chevrolet sadly doesn’t exist anymore. Though a beautiful work of art that stood out for the incredible attention to detail and the talent of an entire team that strove to make it closely resemble its metal “sibling,” it was never meant to outlive the Canadian winter. It was, in fact, part of a new ad campaign by automotive parts company Canadian Tire.

To prove that its products were made for Canada life and especially the harsh Canadian winter, and to showcase the abilities of its MotoMaster Eliminator battery, Canadian Tire came up with a very novel idea, both for that time and our present moment. Why not freeze the battery and then drop it into an ice truck, to show that it could still start without issue? The effort could be turned into an ad campaign.

This sounds way easier than it was to put into practice. Partners included creative from Taxi, media from Touche!, and online video from Notch, and that was just after the truck was built. For that to happen, a base truck had to be sourced from the U.S. through Bronson Line Automotive Ltd. Then, Pick Me Productions stripped it bare and then built a support frame for the ice, while the body was re-built by Iceculture.

It started with a 2005 Chevy Silverado 2500 Heavy Duty that was first checked for rust and other signs of deterioration. Once it passed the quality check, Pick Me Productions stripped it clean and then made some modifications, in view of getting it ready for its brand-new body of ice. This included a custom steel frame, lowering the engine bay’s height and width, and adding extra fans to make sure the heat of the engine wouldn’t melt through the ice encasing it right away.

From there, the truck was shipped to Hensall, Ontario, where Iceculture could get started on the body of ice. The challenges were many and, at first sight, nearly impossible to overcome. They needed to build a truck that, despite its weight, could still be driven around town, as the goal was to attempt to set a Guinness World Record. They had to make sure it could turn without cracking or falling apart, and make sure it wouldn’t melt shortly after rolling out of the studio. They also wanted it to stay transparent for shooting during daytime, which meant they had to suck all the air from the ice, and replace blocks that had developed cracks and fissures.

Three ice bodies were built in total, though the media only spoke about one: the one that ended up making that Guinness Record attempt by driving 1.6 km (1 mile) at about 20 kph (12.5 mph) around Hensall. It never made it into Guinness, but it was still recognized by the international media as the word’s first drivable, self-propelled ice truck, including by Ripley’s Believe It or Not.

Another truck was built to show the clients, while a second was used for tests. These were incredibly important, as they ensured the ice sculptors that the truck could withstand actual road conditions for the record attempt.

After the record attempt, the body used was disassembled and put back together again, so Canadian Tire could shoot the ad that would run later in January 2014 during the Bridgestone NHL Winter Classic.

No effort was spared in making it resemble the original metal truck: it even had seatbelts (no heated seats, though), a pine tree air freshener made of ice, license plate, rearview mirrors, ice windshield, and working lights.

The battery for which the truck had been built was chilled (lol) at over -40 degrees Celsius (-40 degrees Fahrenheit), and was inserted into it right before the ride. Needless to say, the ride itself was a major event, bringing out the people of Hensall to witness history being made.

The ad and the subsequent films, a making-of video and an after video, proved massively successful, boosting sales for Canadian Tire by 70 percent.

As for the fate of this beautiful Chevrolet truck, it wasn’t as happy. As part of the campaign, Iceculture left it in the studio to defrost over the next 40 hours, after they were done with it. The whole thing was documented on video, which also ran within the campaign. It’s no longer available and it’s probably for the best. Now, we’re left with the memory of this fully-functional, drivable ice Chevy. 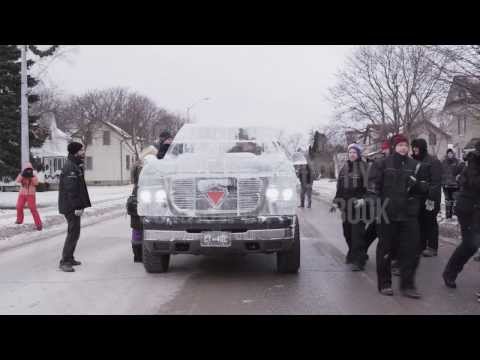 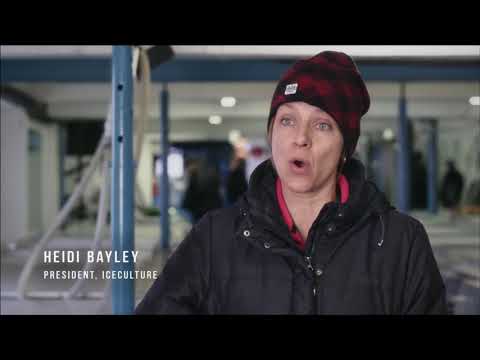