The 1958 Impala was the car that helped Chevrolet get over the recession year that affected the United States, even though it wasn't a distinct model but a trim level for the Bel Air.

What started as a trim level turned out to be a surprising success. That determined the automaker to create a different path for the Impala, which later on became the first American car to be sold in more than one million units in a single year after WWII.

General Motors had its 50th anniversary in 1958, and that's why it decided to create several special versions for the brands under its umbrella. Even if that meant heavily modifying a few vehicles, such as the Impala. Like the Sports Coupe version, the convertible received a quad-headlight front fascia and, up to the A-pillars, it resembled the Bel Air. Yet, the panoramic windshield and the more extended rear deck were different. In addition, at the back, it sported three taillights.

Inside, Chevrolet installed a taller instrument panel than the rest of the dashboard. It was fitted with a speedometer and a few gauges. In the middle of the dash panel, the Impala sported a radio and the controls for the ventilation system. At the front, the cabin featured a bench seat with individual adjustments for the seatbacks, while in the rear, the carmaker installed a bench for two with a center armrest. Thanks to the extended rear deck, the carmaker managed to completely conceal the canvas roof when it was retracted behind the cabin.

Under the hood, the Bel Air Impala received a choice of two engines with various power outputs, depending on the carburetor system. The most potent version was fitted with the newly introduced 5.7-liter V8 fed by three two-barrel carburetors that offered 280 hp. 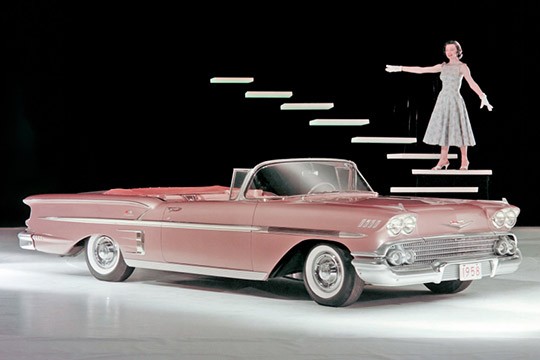