2 The Richest Man in Spain, a Famous Fashion Mogul, Is Selling His Bespoke $84M Superyacht

It’s no news that some of the wealthiest people in the world only got richer during the pandemic and continue to enjoy their opulent toys, including cars, private jets, and superyachts. According to Forbes, the number of British billionaires has increased from 45 to 56, in 2021. Together, their fortunes add up to almost $214 billion. And Sir James Ratcliffe continues to be at the top of that list.

Ratcliffe became UK’s richest man in 2018 and, according to Forbes, he maintained that position in 2021 as well, with an estimated net worth of $17 billion. At 69, the British billionaire is enjoying life to the fullest, and he once told The Financial Times that “I can’t think of anything I set out to do and have not completed."

The oil industry tycoon is one of those billionaires with a rags-to-riches story. In early childhood, he lived with his parents in a council house in Lancashire, but apparently always knew that he was going to be successful one day. He started his own business when he was around 40-years-old, and established what would become a chemical giant, Ineos, in 1998, when he was 45.

From a chemical engineer, he became an ultra-rich financier and industrialist. Ineos, of which he currently owns 60%, is the fourth largest chemical company in the world, and a few years ago he was awarded a knighthood for his services to business and investment.

Ratcliffe prefers to stay away from the spotlight and hasn’t revealed too much about his luxurious possessions, but superyachts can hardly be kept secret. As expected, he owned several of them, and he’s had the current Hampshire II for a decade. He also owns an expedition vessel called Sherpa, in addition to five private jets, a helicopter, and luxury cars.

The majestic Hampshire II was delivered in 2012 by Feadship, a brand that’s linked to many luxury vessels owned by famous billionaires. A boatbuilder based in the Netherlands, with an extensive history going back to 1849, Feadship claims to be the world’s number one when it comes to pure custom superyachts.

The 257-footer (78.5 meters) was built as the ultimate fun and adventure heaven for the British billionaire who remained loyal to this builder throughout his life, and who is, in return, considered “a seasoned owner with a great love for action and sports.” Indeed, Ratcliffe is not only a football club owner (he owns Swiss FC Lausanne-Sport and French OGC Nice), but also a passionate outdoorsman – he completed expeditions to the North and South Poles, a marathon in the Sahara Desert, and an extensive motorbike trek in South Africa.

This is why his superyacht’s most remarkable feature is the ball court on the foredeck, which can be adjusted for football, basketball, tennis, and other sports, also doubling as a helipad. The yacht’s second outstanding feature also has to do with sports and adventure – a crow nest (a special structure at the top of the mast, traditionally used as a lookout point) that allows daring guests to zip wire to the water, from a 25-meter (82 feet) height.

The beach club opens on three sides, revealing a generous swim platform that includes a bar and professional equipment for various types of water sports and land-based sports. A sports tender joins two conventional tenders on the sundeck aft, while a jacuzzi, a bar, and a teriyaki grill welcome guests forward.

Even the engine room of this elegant yacht is spectacular – the “Ferrari red” engines are illuminated by spotlights so that they can be better observed by the guests who are looking down while going from their cabins to the beach club. That’s possible thanks to a suspended walkway with floor-to-ceiling glass.

The interior was designed by the acclaimed Redman Whiteley Dixon (RWD) and was meant to “feel like home,” while also exuding classic elegance. There’s an English-style bar on the bridge deck and a cinema on the lower deck. The yacht was also designed with a separate well-equipped wine cellar. There’s enough room for up to 12 guests, in six cabins, and the owner’s suite has access to a private balcony.

One of the UK’s top billionaires and one of the richest people in the world, the oil industry mogul is unlikely to replace the stunning superyacht that he’s owned for a decade, any time soon. With an estimated worth of $172 million (£130 million), the Hampshire II will undoubtedly make a splash whenever it hits the market. 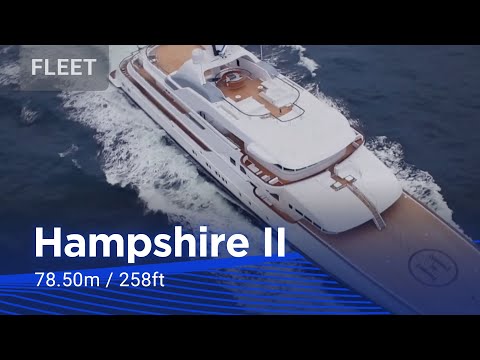