2 BMW S65: The M3’s First and Only V8, and Five-Time International Engine of the Year Winner

5 BMW E30 3 Series: A Better Investment than Gold
Car video reviews:
Up Next

Conceived to homologate a brand-new race car design, the first-ever M3 was also offered as a convertible, even though such a vehicle defied common sense.

During the mid-1980s, BMW was heavily involved in various forms of motorsport. One of the competitions that the Bavarian manufacturer was desperate to dominate was the newly-established DTM (Deutsche Tourenwagen Meisterschaft, or German Touring Car Championship) where it faced local rivals such as Mercedes-Benz, Volkswagen, or Opel, as well as foreign carmakers like Volvo, Rover, or Ford.

Since none of the existing production models were considered good enough to win the competition, the company’s M division was tasked with developing a winning car based on the regular E30 3 Series. But there was a catch. To comply with homologation rules, a minimum of 5,000 road-legal examples needed to be built.

The M engineers got to work, and at the 1985 Frankfurt Motor Show, they unveiled the rabid M3. Although it looked much like the regular 3 Series, there was nothing regular about it. It boasted unique aerodynamically-efficient bumpers, side skirts, flared wheel arches, redesigned C-pillars, and a glass-reinforced plastic trunk cover. Moreover, the chassis was stiffened, while its suspension and braking systems were upgraded.

Weighing around 2,645 pounds (1,200 kg) and hiding a race-bred engine under its hood, it was way faster and handled fundamentally better than its standard counterpart. In fact, it was one of the most thrilling sports cars that money could buy. Fueled by the racing version’s success in the DTM, BMW sold M3s like hotcakes, and eventually, it was forced to increase the production run from 5,000 units to more than 17,000.

During the initial production run, the M engineers had a couple of “hold my beer” moments when they decided that the regular two-door coupe body of the M3 was just too boring, so they proceeded to create a convertible and a pickup. While the second idea was stopped by management after a prototype was built, the first would make it into production, earning its place among the craziest convertibles of the 1980s.

Today, the idea of a convertible M3 doesn’t seem crazy, especially since virtually all generations have been available in open-top guise. However, as I mentioned earlier, their ancestor was the only M3 that was designed specifically for motorsport, and apart from the engine or chassis upgrades, the secret to its success lay in the redesigned C-pillars that dramatically improved the car’s overall drag coefficient.

With those pillars gone, it made common sense to assume that a convertible M3 would become aerodynamically deficient and suffer from chassis flex, which in turn would make it less thrilling.

Thankfully, the M engineers were determined to defy common sense and while working with a standard 318iC/325iC chassis, they went ahead to reinforce it in key areas to increase rigidity, then installed all of the unique body panels like the wider fenders or redesigned bumpers. There was not much they could do about the C-pillars that worked in conjunction with the rear spoiler on the coupe, so for the convertible, they kept the standard 3 Series trunk lid and opted against fitting the spoiler.

Like the coupe, the convertible also got the same interior upgrades which included bucket seats, a bespoke M-badged steering wheel, or shifter knob, and only the backseat was, of course, slightly different.

Mechanically, the coupe and convertible were identical. Power came from the same S14 inline-four, a high-revving, motorsport-derived engine that was capable of 197 to 212 hp, depending on the model year. The multi-piston calipers and slotted rotors were also borrowed from the coupe, while the only slight difference was the spring and shock rates which were changed to cope with the nearly 441 lbs (200 kg) of added weight that resulted from the extra chassis reinforcements and foldable top mechanism.

Despite concerns that the convertible won’t feel as exciting with the extra weight and lesser aerodynamics, it performed extremely well during rigorous tests performed by BMW M’s most experienced drivers. The open-top version felt in no way inferior, so it was greenlighted for production which began in 1988.

Available only in Europe and about $4,000 ($9,883 today) more expensive than the standard M3, the convertible was never a sales success. For all the obvious reasons, people preferred the coupe, so by 1991 when the open-top version was finally discontinued, after only 786 units were sold.

While it was never as popular as its sibling, the E30 M3 convertible was unquestionably one of the craziest cars of its kind back in the 1980s. The mere idea of developing an open-top iteration of a touring car homologation special was pure madness and defied logic, but BMW M proved that sometimes madness leads to brilliance.

These days, the E30 M3 is regarded as one of the best vehicles to ever don BMW badges so naturally, it is highly collectible. When a well-kept example of the rare and once-unpopular convertible pops up at an auction, it usually demands twice as much as a coupe.

If you would like to learn more about this magnificent car, we recommend watching the video below by Collecting Cars. 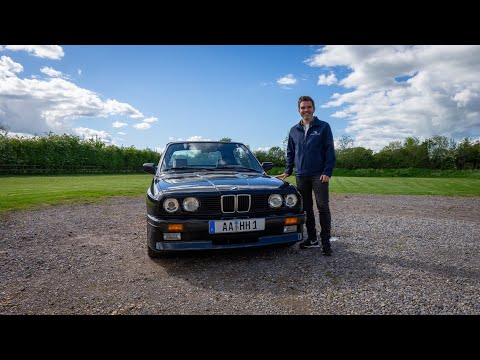