1 From 0 to 200 MPH: Rare BMW Reveals Why M Is the Most Powerful Letter in the World

2 Now 19 Years Old, the BMW M3 CSL Remains One of the Best M-Badged Cars of All Time

In 1972, the German carmaker established BMW Motorsport GmbH, a division that went on to build the company’s most iconic racing machines and high-performance street cars. It all started with the 3.0 CSL, a spectacular homologation special that continues to captivate the hearts and minds of enthusiasts, five decades after it was introduced.

A Look Back at the Timeless BMW 3.0 CSL, the Forefather of All M-Badged Bimmers

Since it started producing automobiles in the late 1920s, BMW took a keen interest in motorsport. By 1939, the Bavarians racked up class wins at some of the most famous races in Europe, such as the Mille Miglia or the 24 Hours of Le Mans, but then the Second World War broke out and everything came to a halt.

After the dreadful conflict ended, the manufacturer attempted to rise from its ashes, but unlike rivals Mercedes-Benz, who were quick to bounce back, BMW struggled. Fortunately, the company managed to stay alive during the 1950s by producing motorcycles and the small Isetta bubble car under license from Italian carmaker Iso Autoveicoli. Things finally improved in the 1960s with the debut of the Neue Klasse (New Class) model line, which became successful in terms of sales and provided a solid base for BMW’s return to motorsport.

In 1968, it was time to take the business to the next level and build a performance coupe that would not only prove successful in terms of sales, but also challenge Porsche or Ford in the increasingly popular European Touring Car Championship (ETCC).

The answer was the E9, initially released as the 2800 CS (Coupe Sport). It evolved into the carbureted 3.0 CS and the direct injection 3.0 CSi in 1971. That year, BMW assembled a team of 35 talented employees that were given the task of developing a worthy race version of the E9. With ETCC homologation as its main objective, the team that would become BMW Motorsport GmbH a year later worked around the clock and produced an automotive legend: the 3.0 Coupe Sport Light (Leicht in German) or CSL, for short.

As its name suggests, the new car was lighter than its siblings. The models shared the same steel unibody, yet for the CSL, engineers used thinner steel in various areas that didn’t compromise the structure’s rigidity. Moreover, aluminum was used in the construction of the doors, hood, and trunk lid, which helped shave off even more pounds. In the end, it tipped the scales at 2,569 lbs (1,165 kg), 400 lbs (181 kg) less than the carbureted CS.

While the race cars received distinct bumpers and spoilers, the first batch of road-going homologation specials looked much like the 3.0 CS and CSi, save for some side strips, 3.0 CSL badges, and slightly different bumpers. That changed in 1973 when a unique air dam replaced the standard front bumper and a removable, motorsport-derived racing kit became available. It added an air guide above the rear window and a huge rear spoiler, upgrades that led to the CSLs being nicknamed Batmobiles.

Inside, the weight-saving treatment consisted of less sound deadening, no electric windows or power steering, thinner carpets, a pair of lightweight Scheel bucket seats, and a smaller three-spoke steering wheel.

Interestingly enough, BMW offered the optional City Package for those who preferred a more upscale feel. This option added a conventional interior, but it also replaced the aluminum body parts with standard steel panels. As you can imagine, few CSLs were fitted with this package, and according to the carmaker, the vast majority were right-hand-drive cars delivered to the UK.

Regardless of the engine version, all CSL modes came with a Getrag four-speed manual gearbox and a limited-slip diff, just like all other E90s.

In race trim, the powerplant was bumped up to 3.5 liters (213.5 ci) and featured a Kugelfischer mechanical fuel injection system, dry-sump lubrication, and independent throttle bodies. It could spit out around 350 hp in 1972, whereas a year later, engineers managed to squeeze out at least 25 additional horses thanks to various improvements.

The 3.0 CSL became extremely popular among enthusiasts, and all 1,265 homologation specials produced from late-1971 to 1975 sold like hotcakes. This was aided by the performance of their race-spec counterparts who won the ETCC in their maiden season (1973) and continued to dominate the competition until 1979, losing the title only once (1974). This terrific car was also responsible for another Le Mans triumph for BMW, finishing first in its class in 1973 with Toine Hezemans and Dieter Quester taking turns behind its wheel.

Although it never donned the famous M badges, the 3.0 CSL introduced the Motorsport division to the world. It was not the fastest or the most powerful high-performance road car of its era, but it was unquestionably one of the most thrilling. 51 years after its public debut at the Geneva Motor Show, it remains one of the most celebrated BMWs of all time, bud despite its legendary status and rarity, a street-legal example in great shape is much more affordable than you would expect. According to classic.com, the average price for one currently stands at $152,795, which is a small price to pay for a gorgeous piece of automotive history.

You can learn more about the epic 3.0 CSL in the YouTube video below by Petrolicious. 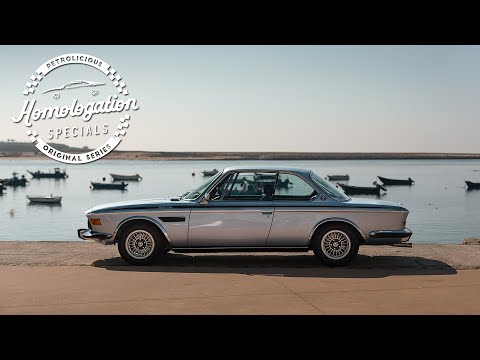