2 BMW S65: The M3’s First and Only V8, and Five-Time International Engine of the Year Winner

4 Remembering the 1,350-HP Turbocharged Four-Cylinder Built by BMW During the 1980s

5 BMW S14: The Four-Cylinder Masterpiece That Powered the Legendary E30 M3
Car video reviews:
Up Next

NIO's Hiring Activity Suggests It Is Preparing to Build a Factory in the U.S.

When Gordon Murray decided to build the ultimate road-legal supercar for McLaren, he ended up in Germany where he convinced BMW’s Motorsport division to design one of the most impressive engines of all time.

Although the S70/2 was specifically designed for the McLaren F1 in the early 1990s, it wasn’t the first production V12 developed by the Bavarians. That distinction goes to the fascinating M70B50, a unit designed more than a decade earlier and used in the first 7 Series, as well as the sportier 8 Series grand tourer.

Based on an architecture that can be described as two straight-sixes fused at a 60-degree angle, the all-aluminum 5.0-liter featured a Bosch Motronic 1.7 ECU, fuel pump, fuel rail, distributor, mass airflow sensor (MAF), crankshaft position sensor, coolant temperature sensor, electronically actuated throttle body, and a single overhead camshaft valvetrain on each cylinder bank. Theoretically, this allowed it to continue to run on six cylinders in case one bank had to be deactivated.

Capable of producing up to 295 hp and 332 lb-ft (450 Nm) of torque, BMW's first production V12 was everything but a performance engine. That changed in the following years when the M division was tasked with transforming it into a supercar-worthy powerplant. The project that would remain secret until 2010 yielded a highly-redesigned unit that made no less than 640 hp and 479 lb-ft (650 Nm) of torque. It powered the elusive M8 prototype that never made it into production, but also led to the tamer, 375-hp S70B56 that debuted in the 1992 BMW M-tuned 850CSi.

During the time when a handful of engineers were working on the M8 prototype, Formula 1 mastermind Gordon Murray managed to convince McLaren boss Ron Dennis to greenlight the development of what he saw as the ultimate road-legal supercar. With the help of British designer Peter Stevens, he put together several sketches and proceeded to build a prototype, but McLaren didn’t have the funds to develop a completely new engine for the car. To solve the problem, Murray initially approached Honda who was already supplying the engines for the Formula 1 team, but a deal could not be reached.

Murray then took the blueprints for the V12 he desired to BMW Motorsport’s engineering legend, Paul Rosche, who was already working on such a unit as part of the aforementioned M8 project. Rosche was more than intrigued and, after Murray agreed to terms with the German company, he got to work on building the timeless S70/2.

Like the production M70 and S70, the new engine was an all-aluminum, 60-degree V12 but that was where the commonalities ended. With a bore x stroke of 86 mm × 87 mm (3.39 in × 3.43 in), it displaced 6.1 liters and employed a host of motorsport-derived technologies such as a magnesium dry-sump lubrication system, Nikasil-coated bores, small ignition coils on each cylinder, or bespoke forged-aluminum pistons.

The design of the cylinder heads was based on those of the M8 prototype’s novel S70. Each one employed chain-driven dual overhead cams with four valves per cylinder DOHC with a double VANOS (variable valve timing) system. It worked by delaying the inlet cam relative to the exhaust cam at low revs, which reduced the valve overlap, delivered increased idle stability, and amounted to better low-end torque. At higher engine speeds, the valve overlap was increased to boost airflow into the cylinders, unleashing a vast amount of power.

The sequential injection system used two Lucas injectors per cylinder. One was installed close to the inlet valve and operated at low rpm, while the second was located higher up and kicked in when engine speed rose.

Another feature inspired by the M8 prototype’s S70 was the intake system. It was comprised of twelve individual butterfly valves and a carbon fiber manifold.

Boasting a compression ratio of 11:1, the naturally aspirated V12 could produce a maximum output of 618 hp at 7,400 rpm and 479 lb-ft (650 Nm) of torque at 5,600 rpm, which was a bit more than what Gordon Murray initially requested. Nevertheless, he was more than pleased with the unit which was mounted mid-ship in the McLaren F1’s gold-foil insulated engine bay.

In the years that followed, the engine was slightly modified for motorsport use in the McLaren F1 GTR that dominated the BPR Global GT Series (or FIA GT Championship since 1997) and earned an overall victory at the 1995 24 Hours of Le Mans.

In 1998, BMW’s Motorsport division transformed it into the 6.0-liter S70/3. This iteration was specifically created for the V12 LM prototype racer and its succesor, the V12 LMR that was responsible for the German manufacturer’s only triumph at Le Mans, in 1990. To celebrate the victory, the race-bred S70/3 also ended up under the hood of an SUV. Fittingly dubbed X5 Le Mans, the concept never made it into production, but it managed to earn a place in the history books by lapping the famous Nürburgring Nordschleife in less than eight minutes – an SUV record that was unbeaten for the next 19 years.

The S70/2 was produced from 1992 to 1998, while its motorsport-oriented sibling carried the torched until 2000. For more than two decades, it remained the most powerful production engine that Bavarians had ever built, until being surpassed by the 626-hp, twin-turbo S63 of the M5 CS. Despite that, it remains BMW M’s masterpiece, as well as one of the greatest engines ever conceived.

In the video below, you can take a rare glimpse of this amazing engine sitting outside the F1’s chassis in Jay Leno’s garage. 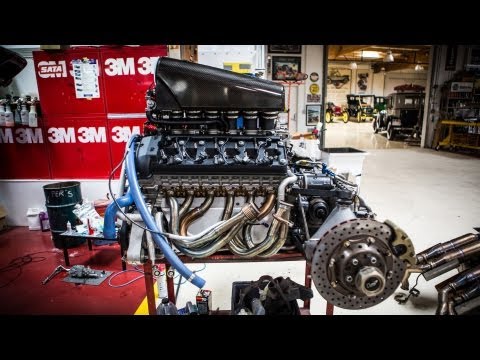