1 Tesla Model 3 Owner’s Manual Is Worth The Read

2 Tesla Powerbank Portable Charger Can Be Yours For $45

4 Fancy the New Tesla Roadster? Learn How to Clear the Biggest Hurdle: the Wife

We're not sure if that was what Elon Musk and the Tesla top brass intended, but last Thursday's event was clearly hijacked by the Roadster even though it was supposed to be the Semi's night.
1 photo
But put a sports car - not to mention one that's been eagerly awaited and promises to become the world's quickest AND fastest production vehicle - next to just about anything, and that's the result you'll get. Musk must have been very naive to think otherwise, so we doubt the result was a surprise to him.

That being said, the Semi put on quite a show. The truck may have been just a starter for the Roadster, but it was quite a good one. In fact, you could argue that it promised to do the same things to the world of trucking as the sporty Tesla threatened to do that of regular cars.

Just in case you have only read them 99 times instead of 100, here are the Tesla Semi specs that we know of one more time (and here ar its prices). The power output was kept secret as was the battery capacity, but Musk told us the two truck versions would travel 300 and 500 miles respectively at highway speed and full capacity. That means a lighter load and taking the back roads can lead to even longer ranges.

But even though this is a commercial vehicle used to ship inanimate objects, the one feature that caught everyone's eye was its acceleration. The Tesla Semi will do 0-60 mph in five seconds, which is 0.8 seconds slower than what the Ferrari F40 needs. Crazy, right?

Well, some of the people present at the event got the chance to experience the sensation firsthand as the line for a ride in the Semi was just about the same length as the one for the Roadster. The sensations couldn't have been comparable - the electric sports car claims a 1.9-second 0-60 time - but on the outside, seeing this huge beast sprint like a cheetah sure beats it for pure spectacle.

It doesn't look as though the driver was giving it everything it had on that section of the course, but some of the people in the attendance complained about the smell of burned rubber, so we might be wrong. Either way, that thing can move. 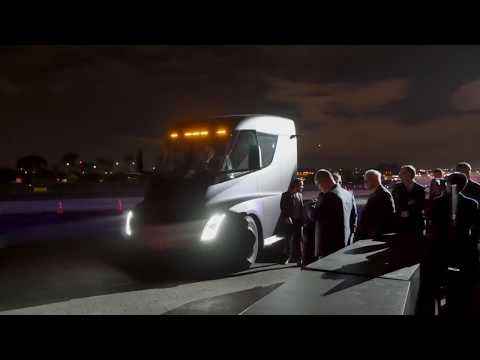 Editor's note: It's so quick, the camera loses focus.