5 Cybertruck at Giga Texas Looks Like Musk Driving on Mars
Car video reviews:
Up Next

Gigafactory Texas is supposed to start delivering cars to customers “by the end of the first quarter,” and the latest footage from the factory shows it might be right on track. Recently, a truck full of Tesla Model Y crossovers was spotted leaving the factory, which points to an imminent opening.
8 photos

During the latest earnings call, Tesla announced that production has started at Giga Texas and Giga Berlin. This does not equal commercial production, but rather testing production. More specifically, the machines on the factory floor are calibrated, while the cars that result from this pre-production activity are tested in various ways, with most of them being crashed, actually.

Gigafactory Texas is the place where the most advanced building techniques in the Tesla universe are used to build cars. We learned that from Elon Musk, who confirmed that  the Austin-built Model Y features both structural battery packs and the newer 4680 cells.

“So in Texas, we’re building the Model Ys with the structural battery pack and the 4680 cells, and we’ll start delivering after final certification of the vehicle, which should be fairly soon,” Musk said at Tesla’s Q4 and Full Year 2021 earnings call.

The 4680 cells were unveiled in September 2020, but they are still to be produced in meaningful numbers, as a recent report from Tesla’s Kato Road facility shows. The pilot line that manufactures 4680 cells there appears to deliver good yields, but the quantities are not enough to sustain the mass production. Nevertheless, the cells will be later mass-produced at Giga Texas, so these problems will be soon sorted out.

“We believe our first 4680 vehicles will be delivered this quarter,” Drew Baglino, Tesla’s Senior Vice President of Powertrain and Energy Engineering stated. “Our focus on the cell, the pack, and the vehicles here is driving yield quality and cost to ensure we’re ready for larger volumes this year as we ramp and next year. And the 4680 and pack tool installations here at Giga Austin are progressing well, with some areas producing the first parts.”

Looking at the Tesla Model Y on the truck below, we can see the red brake calipers indicative of the Model Y Performance trim. These should get to customers somewhere in April, so Giga Texas is probably on the final straight with starting production. 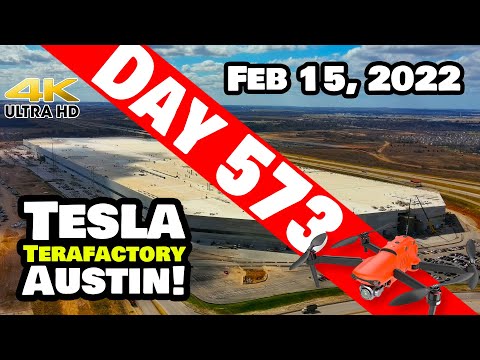