1 Ford Mustang GT vs. C 43 Drag Race Proves That Not All Mercedes-AMGs Are Created Equal

2 Supercharged Vs Twin-Turbo. Which is Better and Why Explained With a Mustang and a Hellcat

Electrification is starting to become a recurring topic every time I get together with my petrolhead friends. I feel that over the years people have gotten used to the idea. There are still those that reject the change, but it only takes for them to experience an electric car to become more accepting of the idea.
23 photos

Yes, we are going to miss the drum-shattering exhaust notes of some of the cars on the market today. Some of us are even going to miss the smell of gas or premix. But I'm having a hard time fighting the change. After all, electric vehicles are not slow by any standards. Sure, there's the whole infrastructure discussion that is still to be solved, but we'll get there eventually.

So going into today's race I was beyond excited to see what the outcome would be. This may just be the first time that the new Mercedes EQS 450+ is being used for such a purpose. But I didn't expect it to win any awards. After all, this car was built with luxury in mind. Its opponents are the Audi e-Tron GT, the Porsche Taycan 4S, and the Tesla Model S P100D. I don't know about you, but I don't even need to look at the spec sheets to get an idea of how this is going to unfold.

But just to be certain, let's have a look at the specs for each of these vehicles. The Mercedes EQS 450+ is obviously at a disadvantage, as it is the only car with just one electric motor. It may have an impressive range, but that comes at a cost. The EQS is the heaviest car here at 5,467 lbs (2,480 kg). It's also last in terms of performance figures, with just 329 horsepower and 406 lb-ft (550 Nm) of torque.

You probably already know this, but I'm a big fan of the Audi e-Tron GT. It's just 123 lbs (56 kg) heavier than the Porsche. With 523 horsepower and 472 lb-ft (640 Nm) available at your right foot, it's not going to be as fast either. But before making any further predictions, let's just see how the race unfolds. Just seeing all four cars on the start line is enough to have you hyped about the future. The EQS is left behind from the very first moment.

The Taycan 4S takes the lead, while the battle for second place is fought between the Tesla and the Audi. Some of you might not have expected this, but the Audi moves into second place, but it can't overtake the Porsche. The Taycan 4S crossed the quarter-mile (402 meters) finish line in 11.8 seconds. The e-Tron GT was just 0.2 seconds slower, and the Model S needed an extra 0.4 seconds to achieve the same result. The EQS needed 14.3 seconds to finish the run, which still isn't all that slow.

A rolling race is up next, and they're starting from 30 mph (48 kph). For the first section, the results are somewhat similar, except for the fact that the Tesla is now in the lead. But it doesn't take long for the Porsche to assert dominance once again. The drivers decide to do a rerun, this time starting from 50 mph. Once again the Model S shines in the first few seconds, only to have its stars stripped away halfway through the race. The final test reveals the braking capabilities of these cars, and for once, the EQS is not at the bottom of the list. 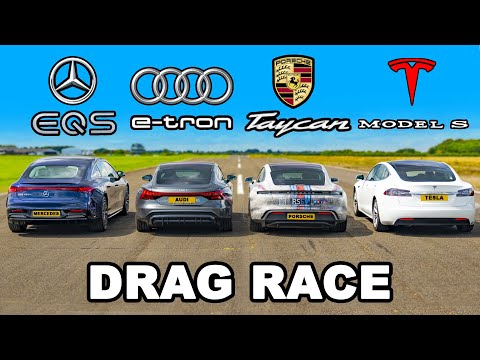