3 Pagani Zonda Revolución Is Terrifying Yet Amazing to Drive

Huayra R Spied Doing Laps at Monza, Is That Starscream?

When Pagani announced the launch of the Huayra in 2011, a part of me was sad. And I guess I wasn't the only Pagani enthusiast that felt that way. Going twin-turbo was a bold move for the Italian manufacturer. Even though that meant more power and more torque, what would happen to the sound?
12 photos

Few things on this planet sound as insane as a Pagani Zonda. Even fewer if we're talking about the Zonda R. I guess it's somewhat on par with the number of people that have ever driven a Zonda before. I can't remember the last time I've selected a Huayra when playing Assetto Corsa. And I can't wait for someone to release the mod for the new Huayra R so that I can take it for a spin around the Nordschleife.

The Huayra R was officially introduced earlier this year, in March. Back to a naturally-aspirated power plant, the Huayra R is even more extreme than the Zonda R. Even though a small number of units will ever be made, it's still exciting to know it exists. Particularly so in a time when every single car manufactures is shifting towards electric vehicles. Lucky for us, there are several speed hunters nestled around the Pagani plant.

And that means that several of them have just spotted the Huayra R out in the wild for the first time. Sure, Formula 1 has lost its appeal after ditching the V12 engines, and then the V10 ones, and finally the V8s. But thank God for Horacio Pagani and his AMG machines! Andrea Palma, the official Pagani test driver, is the man behind the wheel. The first thing that came to my mind when I saw the car doing a fly-by was Starscream from the Transformers series!

You know, because Starscream would turn himself into a jet fighter! Seeing the Huayra R going all out around Monza is like watching a dolphin in the sea, but with an ear-drum shattering soundtrack added into the equation. I guess that some final touches are being added to the car before it becomes available to customers. But when everything is in order, I do hope we get to see a proper review of it, as we had with the Zonda R in Top Gear a few years back. 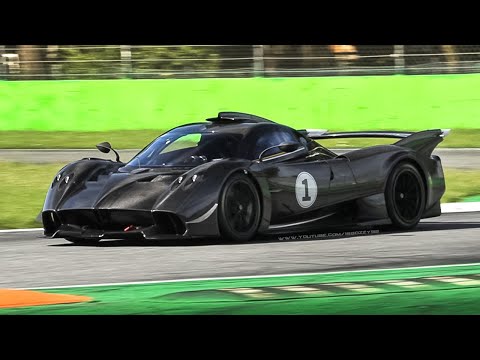