Words can’t even begin to express the incredible ordeals cancer survivors have gone through... Seriously, no one can even fathom – sometimes not even the loved ones – this incredible illness unless experienced firsthand. And that’s something we’re not going to wish even to our biggest enemies. Yet sometimes, there’s an incredible tale of victory against all odds that needs to be witnessed no matter what.
76 photos

We’re not going to take credit for this, not in the least bit, though. It’s entirely Shawn’s and his AutotopiaLA channel on YouTube responsibility for providing us with the feel-good – better said, feel-great – story of the day, or even week. And we’re very much thankful for that.

Because we needed to see this tale of wonder and amazement that includes 22-year-old Cody, a three-time cancer survivor, and his “badass” 1967 Chevrolet C10 custom build project. Better read that last sentence again, because there’s no typo involved – Cody went through the ordeal not once, not twice, but three times!

Shawn, the host, is already renowned for calling the rides he likes the most as being “badass” but on this occasion, we feel the adjective is appropriate for both the C10 truck and his owner. Right from the start, we joined him in being “speechless” - both in front of the C10 bagged and slammed cruiser, as well as this young man who went from relapsing three times in the fight with cancer to being a smiling (probably very wise) singer/song writer.

We could all learn a thing or two from his story; for example, from the 10:20 mark you can even check out one of his songs (Shawn’s guitar is backing him up). Of course we’re also interested in the C10 truck itself, a major custom build project – just check out the big list of sponsor decals on the front and rear glass – finished about two and a half months ago with some help from the Make-A-Wish Foundation who provided the Strato Blue paintjob and the interior.

The video starts with the customary look under the hood (from the one-minute mark) where an old-school 383-ci (6.3-liter) resides where Shawn expected to find an LS, followed by loving explanations from Cody regarding all the modifications performed on the truck. Hint, there’s a Black Widow Neighborhater exhaust lurking around that GSI Machine and Fabrication frame kit and many more interesting details.

The interior discussion follows from the 3:40 mark, combined with the story of how the 1967 C10 came to reside on the frame thanks to a very modern (and exposed!) Air Lift kit, which basically makes the truck scrape the pavement every time there’s a gradient to the road. Then it’s off to the drive part from the six-minute mark, complete with the customary burnout (9:52), although Shawn does mention “I wasn’t expecting that, Cody!” 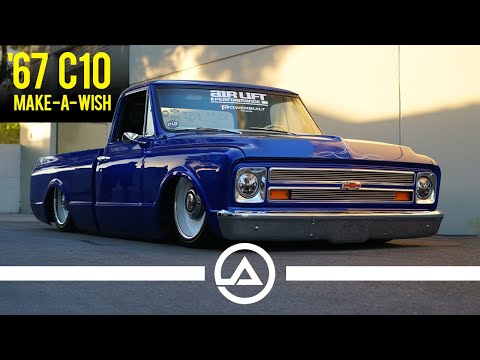