The VanMoof SmartBike Comes with a Lifetime Anti-Theft Warranty

One Tesla, One Cool Dad, One $100 Bill and One Kid Who Really Wants It

What is it about Teslas that make their owners want to prank their kids? We've shown you this guy who thought moving the car using the Summon feature with his son inside was a fun way to spend the afternoon, and now this.
1 photo
This prank must date way back to when fast-accelerating cars became available to the public. People noticed that the force of the acceleration pushes you back into the seat, and trying to get up during those moments is virtually impossible, no matter how many crunches you do at the gym. But instead of just laughing at your passenger as his body is stuffed into the car's seat, why not raise the stakes a little?

What is it that everybody wants? Love? World peace? Eternal life? Sure, all these things sound nice, but the actual answer is a lot more cynical than that: it's money. Whether they want it to buy food for their family or a new video game, nobody will ever say no to a one hundred dollar bill. Money is the best possible present, but even though everybody agrees to that, it was decided at some point that offering it was a display of bad manners, so everyone keeps buying lousy gifts ever since.

Personal birthday frustrations aside, the kid in this video made no exception. He wanted the money to buy himself a new Xbox game, and probably lots of ice cream with whatever was left. Well, with that in mind, we're a bit conflicted about whether we should root for him or not, as they are not two of the most healthy options out there.

Fortunately, we have Tesla's phenomenal acceleration on our side, as well as a few tricks this machiavellic dad employed. Knowing his kid is going to give everything he's got and launch after that bill like a cheetah on a stranded gazelle, he appears to have lowered the car's backseat a little in advance. Also, he doesn't quite play fair, taking his son by surprise the first time, then inventing something new with each try.

The deal was that if the boy could grab the money by the time the car reached 60 mph (97 km/h), the money was his. However, he couldn't reach for the bill before the dad hit the gas pedal, which meant that he was left with just a few seconds of hard acceleration to unglue himself somehow from the seat and take the money.

The video is surprisingly entertaining, and it's probably down to the great relationship this dad has with his son. It's pretty obvious the kid wants to win more than he wants the actual money, probably knowing he is going to get what he wants anyway. After all, his parents do own two Teslas, so it's not like a video game was going to hurt their budget too much. 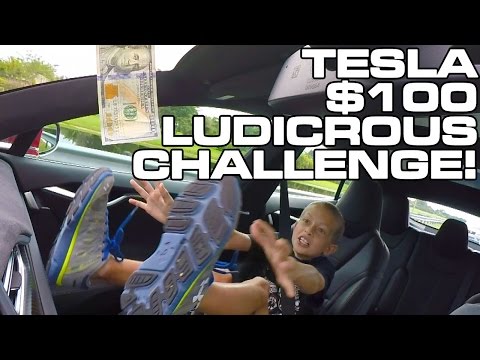