1 BMW i3 with Range Extender Gets Class Action Lawsuit

Vlad Mitrache
Few cars had such a mixed reception when they were first launched as the BMW X6. It came into the world at a time when SUVs were still being disputed (while also selling like the proverbial hotcakes), and began to forge a completely new segment all by itself.
1 photo
The SAV (Sports Activity Vehicle, because BMW doesn't do "utility") Coupe was born, and the world was completely split about it. There were those who loved it, and then there was the majority who thought it was an abomination and that they should kill it with fire. They didn't, and the X6 spawned a smaller offspring, as well as similar models from the competition in the meantime.

As if its simple existence weren't enough, BMW went one step further and released an M version, something that was only made more digestible by the fact that there was one car that made even less sense: the X5 M. Well, any doubt that still hanged over the go-fast X6 was quickly brushed aside by the thing's impressive performances: it's got a 4.4-liter V8 engine developing 575 hp and 750 Nm (553 lb-ft) of maximum torque. Add the four-wheel drive system and an excellent eight-speed automatic transmission, and you get a 4.2 seconds 0-62 mph (0-100 km/h) sprint time and a top speed that's limited to 250 km/h - 155 mph (with the possibility of lifting it to 280 km/h - 174 mph).

Somebody wasn't happy with all these numbers provided by the manufacturer, and wanted to see how the beast would do in sprint from zero to its maximum speed. Using the Launch Control feature he sets on to do it (on an unrestricted section of the German autobahn), but not before giving us a brief visual presentation of the BMW X6 M.

Looking at it, you can see both sides of the argument: it does exert some sort of unexplainable appeal - it's probably called "raw power" - but the X6 can also be interpreted as "a little too much." Not to mention utterly useless when compared to the equivalent X5. And yet, by some sort of miracle, it caught on, it grew on people, and it's now regarded as a normal occurrence on the street.

You watch as the video nears completion, and you start to ask yourself "have I been tricked? There's no way there is still time for this lumbering beast to reach 280 km/h before the clip ends." Don't worry, there's no trick, the BMW X6 M delivers as promised. 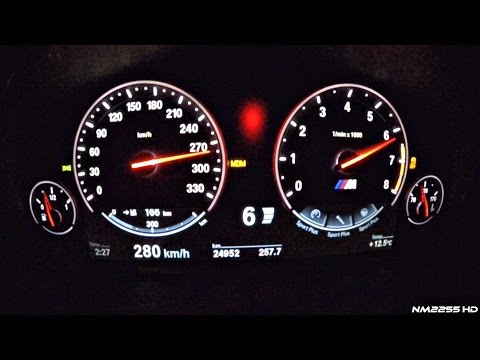