2 Floating Seahorse Villa Is the First of Its Kind, Has Underwater Bedroom and Coral Garden

3 On Board Christina O, the Former Frigate that Wrote the Book on Superyacht Lifestyle

5 SeaPod Is the World’s First Eco-Restorative Float House, the House of Tomorrow
Car video reviews:
Up Next

Home is where the heart is. For some people, it could be on the top level of a skyscraper, while for others it’s at whatever location the gasoline budget allows for. For David Ratzlaff and his family, home can be either on water or on land, depending on when the water in Kinkbasket Lake rises.

August is Sea Month at autoevolution, a full-month virtual party to celebrate the strangest, most creative and impressive builds that float. David Ratzlaff’s float house is registered as a boat, even though it doesn’t have an engine, so it’s a perfect fit. It’s also a beautiful example of off-grid living, downsizing, and of skill and hard work.

David Ratzlaff lovingly calls his float house the Marge Barge, after his wife Margaret. It’s not his permanent residence, but it could be if he wanted: the Marge Barge is off-grid and insulated, and equipped with every creature comfort. The issue of supplies taken into account, it could serve as a permanent homebase for two adults looking to escape the noise and commotion of the city.

The Marge Barge wasn’t always a float house. In fact, Ratzlaff says in a recent interview for the FloatingOrb YouTube channel (FLORB), which you will find in full below, it started out as a vacation home. Ratzlaff is an experienced builder: he owns the HR Pacific management company, one of the largest in Western Canada, which specializes in timber construction. He didn’t start from zero.

As he explains in the video, some 15 years ago, he thought of building a family vacation cottage out of timber left over from bigger projects. At about the same time, he came across a nice community on Crown land, on the shore of the Kinkbasket Lake on Bush River, that espoused the same beliefs as his family, so he decided to build that cottage there. In 2016, they were told that they had to vacate the spot of land.

A practical man, Ratzlaff had built the cottage on stumps, so it could be moved at a later time. Since he was no longer allowed to have it on land, he thought about floating it, so he started building a barge with oversize spruce logs. Even his close associates and friends thought he was crazy because of it, but he was convinced the house would float once the water rose up. He moved the entire structure on top of the 56 x 36-foot (17 x 11-meter) barge, anchored it, and waited for the water to come up.

It’s been years since then, and the Marge Barge is still on water. Well, technically, it’s on water for most of the year, because the water level goes down in winter, so it sits on the ground until spring. Ratzlaff has been improving it each season, adapting to the needs of his growing family, so that now, it has a hot tub on the generous, putting-green-covered deck, a slide, a place to anchor toys, and all the tools necessary to do repairs and maintenance on them.

Marge Barge is also off-grid now, relying on three 100-pound (45.3-kg) tanks of propane and generator, and solar panels on both sides of the house for energy. Ratzlaff hopes to be able to upgrade the solar panels soon, but as of this moment, he can only run the lights on solar. The house is foam-insulated throughout, so it can be used in the winter too. It has a full bathroom with shower, composting toilet, and instant water heater, a propane heater and a wood- and coal-burning Godin stove (which is also a family heirloom), and the gamut of appliances necessary for comfy living.

The house is small, offering just 320 square feet (30 square meters) of living space, with sleeping for four. There’s a living room downstairs, with an open-plan kitchen and the bathroom, and a bedroom upstairs. It’s more a loft than a proper bedroom, so it doesn’t offer standing height but at least it has a nice terrace for the morning coffee.

But spaciousness is not the focus of Marge Barge: off-grid living and a cozy place to spend the family vacations are. From this perspective, this float house is perfect. To Ratzlaff, it’s also proof that you can do anything you set your mind to, as long as you’re open to the idea of learning along the way. He says the Marge Barge project was a trial-and-error type of build, not including his experience as a carpenter. 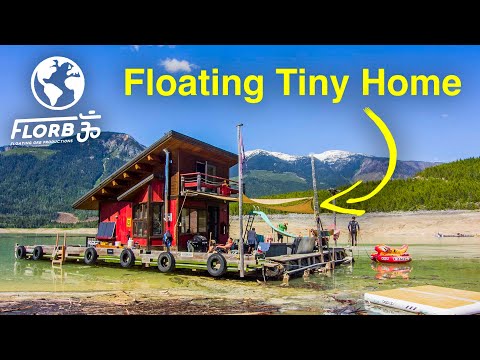