1 Remembering the Mighty Duck, the World’s Most Iconic Amphibious Vehicle

5 The Boaterhome Is Half Boat, Half Truck and All RV: Perfect for Family Vacations
Car video reviews:
Up Next

Amphibious cars have never caught on because none performed well on the road and the water. In the early-2000s, the innovative Aquada managed to solve the performance-related shortcomings of these vehicles, but its price kept it from revolutionizing transportation.

Attempts to build a fully functional amphibious vehicle have been made since the late-1890s but it wasn’t until the 1940s that the idea became mass production. However, it wasn’t until the Second World War that mass-produced models like the American DUKW or the German Schwimmwagen proved the viability of the concept on a large scale.

In terms of civilian use, the first and most successful series production model was the 1960s Amphicar but while it finally gave the masses a functional amphibious vehicle, it was way too slow to be truly exciting or practical.

In the decades that followed, the dream of creating a vehicle that would excel on both land and sea kept many visionaries busy. One of them was New Zeeland-born Alan Gibbs, who went on to design an amphibious catamaran in 1995 to use on the Kaipara mudflats near Auckland. While it was spectacular, the heavy craft’s wheels would often get stuck in the mud, so the inventor eventually got back to the drawing board.

Gibbs happened to live in the same neighborhood with an ex-marine engineer named Terry Roycroft. The latter had also built an amphibious vehicle. Unlike Gibbs’ catamaran, it was a car with retractable wheels that performed pretty well on paved roads and water but had serious reliability issues. Gibbs managed to convince his neighbor to sell the intellectual property to his apparatus, promising to develop it further.

This led to the founding of Gibbs Amphibians, a company that spent the next seven years gathering funds, researching, and prototyping the world’s fastest amphibious vehicle.

Called Aquada, the car was first shown to the public in 2003 at a highly publicized event in London, England.

Similar in appearance to the Mazda MX-5 (aka Miata), the roadster was quickly dubbed one of the most promising inventions of the 21st century.

It featured no opening doors, so passengers had to hop inside the full-leather, three-seat cockpit. Like the McLaren F1, the driver’s seat and steering wheel were positioned in the middle while the other two seats were pushed further back on each side.

Built around an aluminum-bonded frame, the Aquada featured an aquadynamic hull and body panels, which were extensively tested to prevent corrosion. With the press of a button, it could transition from car to boat mode in less than twelve seconds thanks to a sophisticated system that the company dubbed High Speed Amphibian (HSA).

Based on Roycroft’s original ideas, the system included a series of patented technologies that maximized the vehicle’s performance on both land and water such as retractable wheels, three bilge pumps, or the ability to seamlessly switch from one powerplant to another.

Speaking of which, the Aquada was powered by a mid-mounted Rover 2.5-liter V6 and a bespoke water-jet engine. On land, the 175-hp, six-cylinder unit helped the vehicle accelerate to 60 mph (97 kph) from a standstill in about 8.5 seconds and reach a top speed of 100 mph (161 kph). On the water, the compact, in-house developed jet engine kicked in, allowing the amphibian to travel up to a maximum speed of nearly 35 mph (56 kph) and accelerate to a plane in five seconds.

At the time of its release, it was one of the fastest amphibious cars ever built and those who got to test it were amazed by the way it handled on both surfaces. Thanks to near-perfect weight distribution, a stiff suspension that included a huge front anti-roll bar, and a responsive braking system, it drove like a thoroughbred sports car. When transitioning to water, the vehicle remained just as exciting, maneuvering like a well-built speedboat.

In terms of performance, the Aquada was unquestionably the first no-compromise amphibious car with real mass production potential. Unfortunately, it never reached its true market potential, mainly due to its exorbitant price. Because of the high development costs, the initial target of building a vehicle that could revolutionize transportation was never reached, as Gibbs Amphibians was forced to market its innovative creation as a weekend toy for the rich.

Starting around £150,000 (about $295,110), it was as expensive as a Ferrari or a luxury speedboat, but it looked more like a homebuilt Mazda than a supercar or an extravagant vessel. To make matters worse. it didn’t come with modern safety features like ABS or airbags, which prevented it from becoming roadworthy in many countries, including the U.S.

Because of its price and safety concerns, even those with virtually bottomless pockets didn’t rush to buy one, so only 45 of the planned 4,000 units were built. One of them was famously used by billionaire Sir Richard Branson who set a new record for crossing the English Channel in an amphibious vehicle, completing the journey in 1 hour, 40 minutes, and 6 seconds.

While it never became the revolutionary vehicle that it was supposed to be, the Gibbs Aquada proved that a high-performance amphibious car is possible and inspired many other similar concepts that have been introduced in recent years. 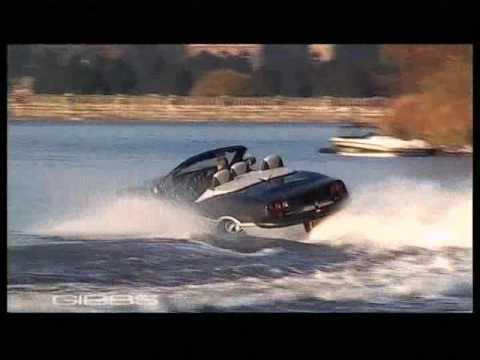