3 This Beautiful Sailboat Got Turned Into an Unconventional Floating Home

4 Stunning $5.5M Mansion Comes With Its Own Electric Boat, Stored Beneath the Living Room

Each home tells a story and, depending on the narrator, it can move the listener to a greater or lesser extent. Painter Mark Hobson’s home would speak for itself, but the way Hobson tells its story is really the biggest treat that comes with it.

Mark Hobson is a self-taught artist from Canada, whose work has sold worldwide. He mostly paints nature pieces, by the water or underwater, and they all have in common a very careful use of the light. Once a biologist and a teacher, Hobson is employing the professional skills acquired in that capacity to document wildlife off the west coast of Vancouver Island, in B.C., Canada, in the town of Tofino, where he’s been living off a float house for over three decades.

Hobson’s home would be an interesting one even if it didn’t float on water like it does, because it’s completely self-sufficient and is an outstanding example of downsizing and upcycling. As a floating house, it’s a perfect fit for autoevolution’s Sea Month, our month-long celebration of all things nautical.

Hobson bought the float house in 1991, when he was a teacher in Tofino, because it was the only thing he could afford at the time. Speaking with the FloatingOrb YouTube channel (FLORB) last year, he laughed: back then, you could still afford to buy a house even on a smaller salary, but the land it would sit on was a different matter. He paid CAD$12,000 (US$9,260 at the current exchange rate) for the house, which he describes as a dark flat box with very little deck space and, because of these things, not exactly suitable for an artist looking to work.

By that time, Hobson had already started enjoying some success as a painter and had decided he wanted to do it full-time, quitting his jobs as teacher and park naturalist. He needed a good studio in which to work, and if it could also serve as his home, all the better. The float house, with the tiny box and its 18-inch (45-cm) deck, would have to do.

In 2005 and 2006, Hobson began improving the existing structure, with helps from constructors and friends. They extended the deck considerably, and eventually built another level on top of the existing one. At the front, the deck is even bigger, so Hobson built himself a woodshed that he regularly stocks starting May, all the way through November, when the rains start.

The upgrade was gradual, but the results are solid. He added a rain collection system, a Sun-Mar composting toilet in a smaller shed outside, built a workbench under the corrugated roof, and installed solar panels connected to 6V golf kart batteries that run the lights in the entire house (there’s a generator too, but he only uses it two or three times a year). From the flea markets, he bought a propane four-burner stove and a propane fridge, and in 2016, a used hot water system. A Berkey water filtration system ensures that he has fresh water to drink.

The house is divided in two: the living area downstairs, and the studio with a bed upstairs. The living includes a full kitchen, a table, a couch, and plenty of space to move around – and paint, too, should the inspiration come. There’s a bathroom with a standing shower off to the side, as well.

The studio takes up most of the area upstairs, and has its own audio system and special light, because he can’t work without either.

When he’s not painting, Hobson keeps daily records of wildlife, which are then computerized and used to monitor the area. The area around the bay where the float house is anchored belongs to Tla-o-qui-aht Tribal Parks, and his record-keeping is part of the deal allowing him to continue there. He says he would have taken his notes either way, because, as a biologist, he’s fascinated by this kind of things.

Speaking of his home, which cost him an additional CAD$19,000 (US$14,660) for the deck extension and the second story (so CAD$31,000 / US$23,920 in total), Hobson points out that most of the stuff inside is salvaged, recycled or upcycled. The only exception are the joists in the ceiling, which he bought new; touring the place, he offers the example of the windows, which are from an old hotel that, this way, gets to live on.

Unlike some of today’s vanlifers who chase Instagram glory and easily monetized content with their mobile homes, and whose preoccupation for the environment is probably far from a priority, Hobson is living the dream: his dream. He is pursuing a passion and he’s doing it in a way that doesn’t harm the nature that he draws inspiration from. 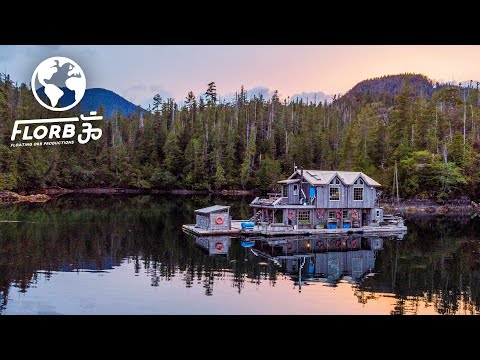