5 Sony Floating Habitat 2050 Paints a Self-Sufficient, Terrifying Picture of the Future
Car video reviews:
Up Next

Cozy, DIY Skoolie Has a Chef-Worthy Kitchen With a Secret Storage Space for Spices

The future is bright, if Ocean Builders’ prediction for it is even remotely accurate. The house of the future, which also happens to be the world’s first eco-restorative float house, will help city-dwellers live an alternative lifestyle, more in harmony with nature, with a reduced footprint and more luxury amenities, and with unparalleled views.

SeaPod Is the World’s First Eco-Restorative Float House, the House of Tomorrow

That house of the future is called the SeaPod and it will usher in the new age of Homo Aquaticus. This is actually one of the three models proposed by Panama-based company Ocean Builders, with the other two being GreenPod, which will be placed on land, and EcoPod, which will be the most sustainable of the lot. Their name really say it all in terms of design and functionality: they are pods that are presented as alternative habitats, but they are meant to be sustainable and luxurious and, hopefully, affordable as well.

The SeaPod is billed as the first eco-restorative float house in the world, with multiple functionality because its location near the coastline. It is, if you will, the next-gen float house. The idea of building homes on water is not new: in fact, there are at least a dozen startups that suggest this type of residences as a means to address the issue of rising seawater levels and the dangers it poses to the coastline. What SeaPod brings new to the table is the promise of a luxurious, smart home that will also be affordable.

Designed by Koen Olthuis, the “world’s first aquatect,” and his team at Waterstudio, the SeaPod will be built and managed in harmony with the surrounding environment. It uses over 1,688 cubic feet of air-filled steel tubes to float 7.5 feet (2.2 meters) above the waves, with the entire section underwater becoming, in time, an ecosystem for marine life. Each SeaPod will have a steel and concrete spar and foundation, with a gel coat and foam exterior. One unit will offer 833 square feet (73 square meters) of living space spread across three and a half levels, with each level designated to a different purpose.

The SeaPod will feature panoramic windows for 360-degree views, because, after all, if you’re going to live out on water, you might as well make the most of it. The windows will have a special UV tint to help with heat reduction and for privacy reasons, because the first pods will be set up closer to the shore to connect them to the grid for electricity (the company says they’re also looking into solar).

The interior layout is simple. As it happens, the SeaPod stands out for its minimalist approach, which clearly illustrates the less is more philosophy. You have a living room that can be customized into anything the future owner might want, whether it’s a gym, a lounge, or an office; a kitchen with breakfast bar; a bedroom with views to kill for; and a spa bathroom that also happens to include a climbing wall that doubles as access to the roof. That last part is not a typo: not only is the bathroom a proper spa, with a four-person jacuzzi with underwater massage jets, underwater mood lights and shower speakers, but it integrates a climbing wall that takes you to the roof.

There’s also a terrace and the possibility to add a “water patio,” a separate floating structure that’s a must for barbecue parties and informal gatherings, and which expands available space by 20%.

Official renders show all-white interiors with flowing walls, to mimic the flow of water, and zero flourishes. The pod can accommodate two people on a permanent basis and two overnight guests, as long as they’re not children or pets, one reckons. In keeping to this aesthetic, everything from wiring to light switches, power outlets, and even lights are hidden from sight.

The goal is to make the SeaPods self-sufficient at one point, but in an initial phase, they will probably rely on energy from the grid. They will have black water tanks that will have to be emptied regularly, but the goal is to integrate a solid waste incinerator and a waterless urinal later on. Desalination will be used for potable water, and supplies will be ferried to and from land by drones or larger supply vessels.

The SeaPods will be smart homes, too, to further reduce consumption and offer unmatched personalization. Each owner will be able to control functions via a smart ring, from lighting to WiFi, to later upgrades that might become available.

At this point, you would be excused if you thought this sounds too good to be true. Ocean Builders insists that the SeaPod is true: pre-orders go live in September, with prices ranging between $295,000 and $1.5 million for one unit. The plan is to deliver the first 100 custom SeaPods by late 2023, and another 1,000 units in the following year. All these will be located in Linton Bay Marina, in Panama, but the company is looking to expand to other territories as well. 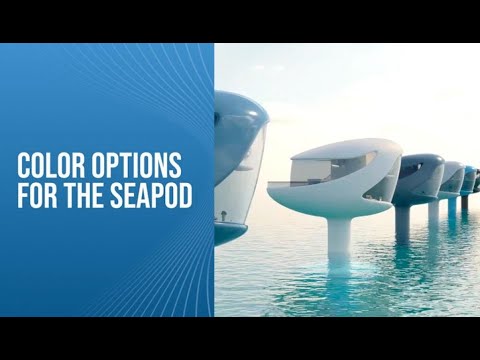