5 Khalilah, the Golden Superyacht at the Crossroads Between Opulence and Innovation
Car video reviews:
Up Next

Whether we talk about cars, boats, public figures or even some sort of clapback in the public sphere, the term “iconic” does get thrown around a lot. This is one instance where it’s not only not a hyperbole, but a most fitting descriptor: Christina O.

It’s difficult to pinpoint the exact year when a superyacht became a “must” for the world’s richest or, better yet, when the bigger the better became the norm as far as watercraft goes. Christina O would probably be a good place to start, because the former Canadian frigate turned into an ostentatious, outrageous luxury vessel by Aristotle Onassis pretty much wrote the book on the superyacht lifestyle.

August is Sea Month here on autoevolution, a month-long celebration of all things that float, with or without an engine. We couldn’t possibly mark the occasion without a mention of Christina O, a true icon for the modern superyacht era, and the one vessel widely believed to have set the tone for what was to come.

A Canadian frigate in a former life, Christina O became, under Onassis’ shrewd management (and ownership), the blueprint for the mega-rich lifestyle: a place where business was conducted, where politicians and celebrities mingled (and didn’t stop at just that), where art and wealth collided, and life-lasting connections were forged. It was a place of prestige, where status was confirmed and elevated, and lots of fun was had. During its peak time, Christina O was no more no less than the place to be.

Launched in 1943, Christina O started out as a Canadian anti-submarine River-class frigate known as HMCS Stormont. Retired at the end of the war, it was sold at scrap value to Onassis in 1954, who paid US$34,000 for its worth in metal, and then invested another $4 million to convert it into the fanciest, most outrageous and luxurious passenger ship. He named it Christina O, after his daughter.

With a total length of 325 feet (99.13 meters), Christina O was the perfect vessel for entertaining. The conversion turned it into a floating palace with the kind of luxury amenities that were unheard of at the time, many of which remain outrageous to this day.

There was a bull mosaic pool whose bottom rose up to become a dancefloor; there was a bar where you could hang your purse or rest your feet on hand-engraved orca teeth, and where you’d sit your (rich) butt on stools made of whale foreskin. There was a concert room where Maria Callas would perform regularly, as well as a spa where you’d get professional massages. The dining room was nothing short of palatial, both in size and in luxury finishes.

The guestlist on Christina O was always a who’s-who of politicians and celebrities, from Richard Burton and Liz Taylor, to Winston Churchill and his entire family, the Prince of Monaco and Grace Kelly, Eva Peron, Frank Sinatra, John Wayne, Paul Getty, and Greta Garbo. When Onassis died in 1975, the vessel was willed to his daughter, but she gave it away to the Greek government, to be used as the presidential yacht. Christina O would spend the next years rotting away in storage, until Greek ship owner magnate John Paul Papanicolaou bought it in 1998, and set out to restore it to its former glory.

As a friend of the Onassis family and perhaps with an eye for business as good as the late Aristotle, Papanicolaou spared no expense in the refit, which saw the ship stripped down before work could begin. Years of abandoned had rotted the once mighty steel hull, and the once glimmering finishes had long lost their shine. Only iconic elements were saved and restored as faithfully as possible: the grand piano, the orca teeth and stools, the lapis fireplace in the Lapis Lounge, the mosaic pool, the atrium staircase, the Baccarat crystal wall lights.

Industry estimates note that the 2000 refit cost anything between $40 million and $70 million, but when you have enough money, it becomes irrelevant. Papanicolaou’s goal was to bring Christina O back to life and to its former glory, and he did just that: the vessel is still in operation today, offering a glimpse into a very glorious and decidedly more scandalous past.

Accommodation on board is for 36 guests and 28 crew, with each suite finished in a different color scheme. Only the most precious materials were used, from the Baccarat crystal for the lights to onyx for the fireplace, and exotic woods for the furniture. Styling is described as “English country manor house,” so it’s heavy on woods and plush fabrics and ornate carpets, but there can be no mistaking the fact that this is a vessel made for entertaining.

Today, Christina O is valued at $40 million and has been with lawyer Ivor Fitzpatrick for a number of years. It charters for over $700,000 a week, not including expenses, and while it doesn’t have a tender garage like the superyachts it inspired, it still packs a lot of toys: a flyboard, waterslides, jetskis, towables, and four tenders, including a gorgeous retro limo. The original steam engines were replaced with twin MAN engines that take it to a top speed of 19 knots (21.8 mph / 35 kph); at a cruising speed of 10 knots (11.5 mph / 18.5 kph), range is up to 5,000 nautical miles (5,754 miles / 9.260 km). 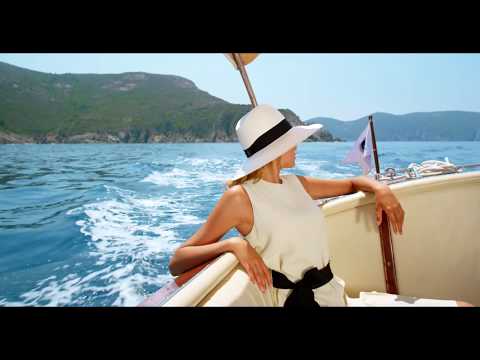