Watching older cartoons is always a nice way of going down memory lane. It can remind you of a time when you didn't have to go to work and didn't have as many responsibilities. Most people will agree that childhood was a much simpler and more exciting period in their lives. And you didn't need billion-dollar movies to get your imagination going. Watching Cartoon Network or similar channels was enough to make you jump for joy.

New Hot Wheels Set of Five Cars Will Make You Feel Like a Kid Again, Zoinks!

In just a few months, the Warner Bros. film and entertainment studio will be celebrating its 100th anniversary. If by some chance that name doesn't ring a bell, think of Bugs Bunny, Daffy Duck, Tweety, or Porky Pig.

These names are bound to bring back memories, which in return will awaken your inner child. And that's the best kind of emotional connection a toy company could hope to achieve, as Mattel will be paying tribute to Warner Bros. for its anniversary.

That means a set of five cars will be coming to a store near you quite soon if it hasn't already gotten there. First of all, you can't help but notice how much work has gone into the visuals imprinted on the cards.

It's even more tempting to keep these as they are, without taking the car out. But there's also the option to carefully remove the car and keep the cards pretty much intact as well. The guys over at the Ministry of Diecast have found one of these sets, which means we can get a close view of the unboxing process.

The first collectible in the set is the Custom '77 Dodge Van. You'll notice that characters from the Looney Tunes are wearing Superman costumes, which is quite a fun mashup to see. Speaking of the Van, this casting was released back in 2008.

We've seen over 30 variations of it so far, including a Treasure Hunt in 2013 and 2021, and a Super Treasure Hunt in 2015. The last time Mattel used this casting was back in 2021, when it was part of the Pop Culture: Speed Shop Garage series. The new Warner Bros. special is a pretty straightforward machine, and it features the same graphics on its sides as it does on the card.

The Fandango is the second casting included in this set, and it's hilarious to see Wile E. Coyote posing as Batman in this one. There's even a representation of an ACME Batsuit box to remind you of all his wacky attempts at catching the Road Runner.

Phil Riehlman designed the Fandango over 20 years ago, and we're getting close to the 30th version of this item. A Treasure Hunt version came out in 2017, but that's about it. You'll see this car featuring Disney or Star Wars graphics, but other than that it's not the most exciting collectible in this set.

On the Midnight Otto card, Looney Tunes characters are now paying homage to The Wizard of Oz. That's rather fitting, as this casting is supposed to be a replica of a 1930s hot rod sedan. The Midnight Otto has been around since 2002 and it has been released in over 40 versions so far.

In 2003 it was featured at the 3rd Annual Hot Wheels Collectors Nationals with multiple liveries available. That is your go-to point if you want the most exclusive variations of this casting. The Warner Bros. version isn't half bad either, thanks to a Sky Blue paint job and the featured graphics.

Up next, the 1940 Ford Coupe reminds us of the romantic drama film Casablanca, with Buggs Bunny and Lola dressing up for the occasion. This casting is the work of Larry Wood and has been around since 2007.

It's slightly more difficult to come by compared to the previous collectibles in this set, as there are just over a dozen variations of it around. It's interesting to note that the early ones featured Spectraflame colors, something that is normally reserved for Premium or STH models.

The star of the show is without a doubt The Mystery Machine. Sure, it's mainly the same thing with this one time and time again. But it always seems to get people's attention. The casting was introduced in 2012, and there are less than 20 variations of it around. Believe it or not, some of these are selling for as much as $400.

Imagine how many Scooby snacks you can buy for that sum. Of course, it's not likely that this base Warner Bros. celebration model will ever be as expensive as its Super Treasure Hunt counterpart. But it's still going to be a nice add-on for any collection. Right now, you can buy the whole set of five cars for $35. It might be cheaper in your local toy store though. 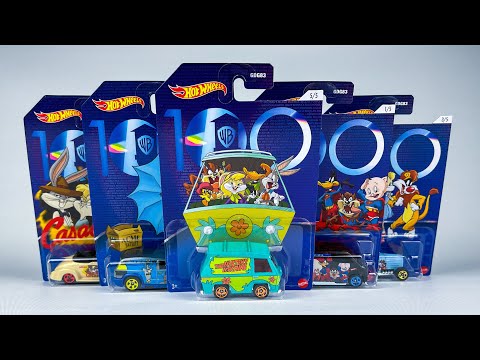