4 Jet Bike Races Ducati Streetfighter V4, You Can Guess Where This Is Going

5 Lucifer’s Son Would Drive this WWII Rocket-Powered Car, and You Can Have It
Editorial

The Rocketman Has a Blast on His ACME Pulsejet Engine-Powered Skateboard, Hits 50 Mph

Home > News > U-turn
Cristina Mircea
Some think he’s a fearless genius, others say he may have been abducted by aliens at some point in his life, or that he has a death wish. Regardless, the crazy Rocketman mesmerizes them all with his insane rides, like this one he took recently on a self-built rocket skateboard.
6 photos

Whenever I watched cartoons as a child, I always rooted for the unpopular, ill-fated character, whether it was Tom over Jerry or Sylvester over Tweety. And every time the Wile E. Coyote hopped on one of his ACME rockets, I’d pray that it’ll reach its desired destination because that darn bird was always so smug.

But if the poor coyote was constantly losing its battles, Robert Maddox, a.k.a the Rocketman, seems to always have fortune smiling on him, no matter how much he pushes his luck. Even though he’s in his 60s now, he’s still the daredevil he was as a kid, when he first found his passion for rockets.

Bob became fascinated with thrust-powered machines from early childhood, and he built his first rocket-powered balsa wood airplane when he was just 10, using Jetex rocket motors. Fast-forwarding to 1991, Maddox saw the schematic of a pulsejet-powered German V-1 buzz bomb, and that changed him forever. That was the moment when he decided he wants to build his own pulsejet engines and make a career out of it.

Now, the crazy Rocketman has a YouTube channel where he constantly posts videos with his creations, riding the most insane vehicles, if we can call them that. He builds all kinds of flamethrowers, whether they’re bikes, cars, pulsejet-engine-powered go-karts, and skateboards, and a lot of them are for sale.

This thing you’re seeing him ride in the video below is a so-called “ACME jet engine-powered skateboard", a tribute to the beloved Wile E. Coyote. And while ACME is a fictional corporation featured in Warner Bros.’ cartoons, the rocket skateboard is as real as they get. It can hit 50 mph (80 kph) and Maddox just took it for a ride. Enjoy! 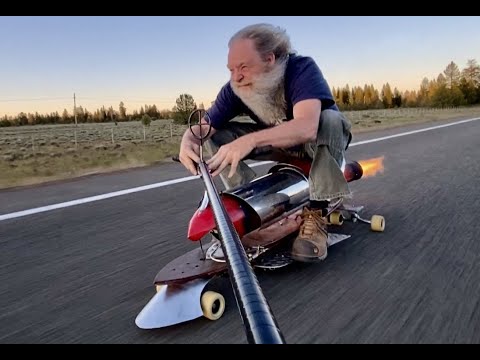