2 The 16K HP $88.5 Million Galactic Super Nova Superyacht Is Now up for Grabs

3 This Is the First Bugatti Pool Table, and It Costs New Lamborghini Huracan Money

Cristian Curmei
Everyone wants to live a rich and luxurious life. However, rarely do people achieve millionaire or billionaire status, but if and when they do, most folks go out and purchase a yacht to show the world their financial standings.
12 photos

Now, let’s say that you’ve become a millionaire and are out looking for your first yacht. Lucky for you, if you happen to scrounge €11,450,000 (around $13.5 million at current exchange rates), you can grab yourself the now-up-for-sale on Yacht Harbour, M/Y Sage.

Just to make things clear, Sage is a vessel built by Admiral Yachts, a boat and yacht builder that’s been around since the 1950s. Over the years, this team has become known for building some of the most extravagant vessels in the world, even a newly announced concept that is undertaken with good ol’ Giorgio Armani. Ah, I didn’t mention that it’s going to be a golden yacht.

But until that happens, let’s bring our feet onto more solid ground and have a look at a ship that really can be touched and owned, if you’re a tad smart about the whole venture. Sure, when you think $13.5 million, it’s a lot, but if you and 11 other friends each put in $1.13 million, voila, you each now own a yacht.

As it stands, or rather, floats, Sage comes in with a length of 39.7 m (130 ft), so it’s not the biggest yacht you’ll ever see, but it is enough to accommodate 12 guests with ease. Here’s a tip, if you and your friends don’t have $1.13 M. Find a way to get another three friends in on the yacht-buying action, for a total of 15, and the overall cash you’ll each have to dish out is just $900K. However, the last three members of your yachting-buying group will just have to crash on any of the countless couches and lounging beds available or use crew quarters. I wouldn’t mind. Would you?

Overall, Sage was born in 2017, and as far as yachts go, that’s a rather young age. With some vessels reaching lifespans well into the 60-80-year range, a ship that’s four years old means that the engines are just now warming up for the long life ahead. Speaking of engines, two diesel Caterpillar pump out a total of 3,800 hp, enough to cruise you around at top speeds upwards of 20 knots (23 mph).

All the fun you plan on having aboard this ship will unfurl upon three decks filled with simple, yet luxurious elegance aimed at making you feel like the pampered and deserving prince or princess that you are. With seven crew members taking care of guest needs, you probably won't have someone cooling you off with a palm leaf, but pampered, you will be for sure.

Interior spaces are created using wood and carpet flooring, wood and composite walls, LED lighting, and marble walls in areas like the bathrooms. One feature that the designers thought of installing are the countless windows that allow natural light into the interior and make everything show off its true colors.

At this time, there is no mention of what sort of toys future owners can find inside as new owners usually bring their own. With a beach deck and garage aft, you should have no issue storing your tender, jet ski, or other water-loving gear. How about setting up a gym here?

Speaking of water-loving fun, how about sun-loving fun? One thing new owners are sure to love is the amount of deck space offered by Sage. Be it on the beach deck, be it aft on the main deck and the wheelhouse, be it at the bow of the ship or in front of the wheelhouse; lounging space is everywhere. Honestly, in comparison to any other yacht I've seen so far, Sage offers one of the highest visual concentrations of open deck and lounge space.

What to do with it all? Well, that’s all up to you my dear reader. Imagine a party. Imagine a tanning and cocktail session. Imagine a moonlit dinner with friends, out on the open sea, where stars can shine without being impeded by city lights. 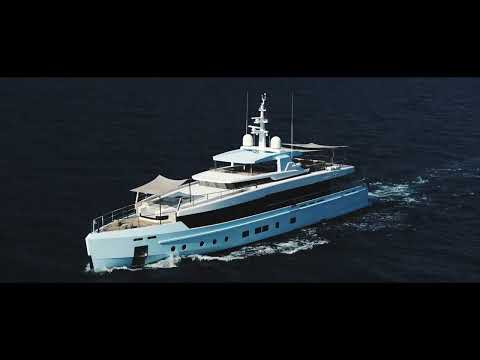