1 This Is the First Bugatti Pool Table, and It Costs New Lamborghini Huracan Money

What do you do once you’ve landed the title of multi-millionaire or billionaire? Most people go out and buy the most luxurious and expensive toys they never had. One toy that happens to be on most people’s list is a superyacht.

The 16K HP $88.5 Million Galactic Super Nova Superyacht Is Now up for Grabs

However, not just any yacht will suffice. If you do happen to have some of the most expensive tastes in the world, why not spend €75 million (about $88.5 million at current exchange rates) on the Galactic Super Nova 70 m (229 ft) custom-built superyacht, currently up for grabs on Burgess Yachts.

The builders behind this wonder? None other than Netherlands-based Heesen Yachts. Yes, the same Heesen that’s been around since 1978 when Frans Heesen bought Striker Boats. Years later, most billionaires know that if you want a boat, yacht, or superyacht to make you port-neighbors think twice about where they spent their own money, you give Heesen a call.

Now, anytime a dream like this is undertaken, more than one team’s work is usually displayed. Sure enough, such is the case with the Super Nova. Heesen put this sucker all together, but the exterior design you see is the work of none other than Espen Øino, a designer whose choice of cues and elements are greatly appreciated by the Heesen team.

The interior of the ship is all the touch of Sander Sinot, an interior designer that has his very own line of superyacht designs, but also lends his expertise to team like Heesen. Taking a close look at the images in the gallery, you can understand why even already-established yacht yards seek his touch.

Since I started with the exterior design, I'll stick to that and then head on inside the ship. One important feature to know about the Super Nova is that its hull design allows for a top speed of 30 knots (34.5 mph), even though this sucker comes in with a weight of approximately 1,200 GT (gross tonnage). But if the owner chooses to sacrifice speed for range, at 12-knot (13.8-mph) speeds, 4,000 nautical miles (4,603 miles) can be achieved.

Long sleek lines and a wonderful dome-like shape that is carried out through the superstructure’s design, makes the Super Nova rise up out of the sea at a moment's notice. A white hull is accented and balance by the use of black glass, while four decks are clearly visible.

This then leads us to the interior. The uppermost deck, the sun deck, features that massive hardtop, keeping everyone safe and completing the superstructure, while the interior features things like massive lounges, bar, dining table, and sunbeds. Here, and throughout the rest of the ship, materials like woods, semi-precious metals, glass, and wonderful floor and ceiling LED lighting, bring a warm tone to the inside

Below this, guests and owners will carry out activities on the wheelhouse deck. The font of this deck features the lounging options at the bow, while aft, even more spaces for sitting around and have a sip of the local bubbly are provided. Alfresco dining, and interior areas meant for enjoying the good, are also found here.

The main deck features room for things like tenders and jet skis in the garage, while aft, a massive swimming pool and sun pads suit sun-bathing needs. Did I mention there’s a waterfall that flows into the pool from the deck above? Aside from the redundant presence of lounges and other areas that initial owners have chosen, this deck also houses the owner’s suite, facing forward towards a future of a chosen creation.

All other VIP staterooms, crew quarters, and engine room, are on the lower deck. Only a couple of images show the interior of a guest’s quarters, but it’s enough to understand the level of opulence found throughout all other rooms.

Is there really a need to say anything else? What the fact that using three main engines, this sucker puts out a total of 12,040 kW (16,146 hp) of power...16,146 horsepower! Yup, that’ll do it. That and an $88 million price tag are sure to land you on the front page of any news site, especially autoevolution. 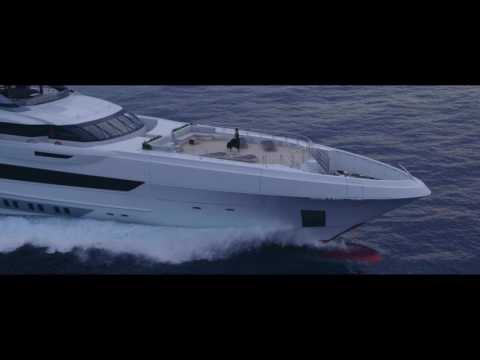 A 17-Year-Old Boy Has a Secret To Teach Tesla About Electric Motors, It's GroundbreakingSee all coverstories