Nissan first presented the sixth generation GT-R (R35) back in 2007. It’s not just the “Godzilla” but also a true dinosaur in automotive terms alongside other models that haven’t received a successor in years, such as the third-generation Dodge Challenger. So, no wonder it’s almost getting ready to give up the crown at the strip.
25 photos

We have seen all sorts of rare occurrences at the drag strip, many of them courtesy of the Drag Racing and Car Stuff YouTube channel. Ranging from snowmobiles going down the quarter-mile to Jeeps climbing the Christmas tree, we shouldn’t be surprised about anything by now, even if we almost see a flip of the natural order of things.

That’s because, as the recent Street Car Takeover event (probably the one taking place at the Atlanta Dragway, not the earlier one that saw the battles going down at the Bristol Dragway) showed us, even Japanese monsters might soon fall.

On this occasion, the D.R.A.C.S. team focused on a couple of feisty R35 Nissan GT-Rs. First up comes a stealthy-gray example that goes against one of the most unnoticeable new cars at the strip, the Audi A3 series. Yes, that subdued design does wonders when the owner tries to hide the upgrades.

We reckon some of them were also bestowed upon this example (which is most likely an RS3) because otherwise, it would be very hard to believe that a stock example would have a chance against a GT-R. And, as far as the battle goes, it’s a very close one.

In the end, the Nissan prevails, but the result is way too close for the GT-R's comfort: the two go neck to neck for the most part of the quarter-mile and wrap up the battle with remarkably close results. As mentioned, the Japanese ride takes the victory with a 9.68s ET, but the RS3 wasn’t too shabby at all with its 9.88s run.

Next up, from the 0:56 mark, comes another GT-R with a more stand-out-in-a-crowd attitude thanks to the brilliant orange paint. The rival from the left lane is equally ready to put on a show for the audience, as the crimson Fox Body Mustang shows it means business with its raised hood, big tires, and huge side exhaust.

A little side burnout later, and the two are prepared for the race. This one is even more entertaining, at least for the kids in the audience, as we see one of them standing out to make sure he doesn’t miss any action. That’s because, at least initially, the old ‘Stang has the upper hand on the GT-R and the Japanese monster has to fight hard to recoup the slower start. 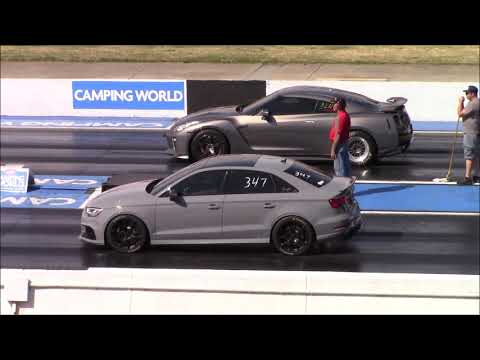