Ford’s sixth-generation Mustang (S550) has become a regular fixture at the drag strip, and everyone knows its range of skills in stock form. Still, this 2016 Mustang GT owner wanted to punch way above its class, and the aftermarket sector is always the solution. Now, let’s see how the upgrades fared against the cream of the crop.
35 photos

According to the description provided by the Drag Racing and Car Stuff YouTube channel, the action with the tuned 2016 Ford Mustang was snatched during the recent Street Car Takeover events that took place at the Atlanta and Bristol Dragways (April 30th-May 1st and May 7th-8th).

And as far as enhancements go, this example clearly went out of its way to make sure no one will mistake it for a regular Mustang GT, adding to the engine bay a twin-turbo On3Performance kit consisting of twin 62-mm forced induction elements (and probably some other, unmentioned parts).

To put things into perspective, the quarter-mile battles debut with a new versus old school brawl, and the S550 scores the first victory for this video reel (embedded below) with a cool ET of 9.37-seconds to the loser’s close, but still not enough 9.54s run.

We then progress through the ages, but we’re still not ready for a full-blown 21st-century war because next up, we have the Mustang lining up with a 1990s darling, the Mk IV Toyota Supra. These twin-turbo kids clearly have no respect for either the elderly or the mature, so the Japanese legend doesn’t get spared either, hence the 9.28s to 10.15s victory for the ‘Stang.

From the 1:15 mark onwards, it’s a modern brawl through and through. First comes a Dodge Charger Hellcat to show the Mustang its rightful place in the quarter-mile food chain, exacting swift revenge for the seniors before. Naturally, the Ford’s 9.34s run wasn’t enough to beat the Dodge’s 9.17s ET.

Then it’s time for the Japanese revenge, as the R35 Nissan GT-R comes to show why it’s got “Godzilla” as a nickname. As such, the Mustang loses another battle, with its 9.42s run being a tad less worthy than its rival’s 9.35s attempt.

Notice how a traditional brand was missing from the action? No worries, because Chevrolets make an appearance as well, in the form of a C7 Corvette ZR1 and a feisty red Camaro, but they both get ashamed by the twin-turbo pony with a set of losses from the 2:58 mark... 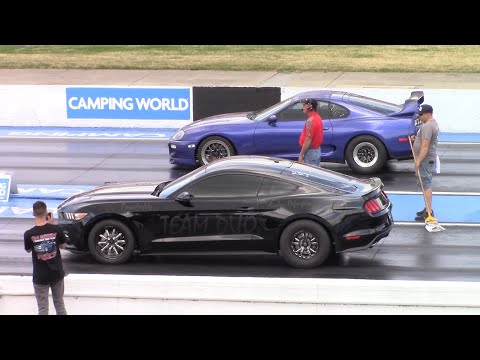