1 These Two Mysterious 1966 Mustangs Rock a Junkyard, Mixed News Under the Hood

4 The Mustang McLaren Was a Ludicrous, Turbocharged Fox Body That We Need To Remember

5 Grossly Underrated, the 1980s SVO Is One of the Best Performance Mustangs of All Time
Car video reviews:
Up Next

The third generation ‘Stang went down in history as an ugly, mostly underpowered iteration of an otherwise iconic pony car. However, from 1983 to 1984, a thoroughly modified, 600-hp version could be seen on North American tracks.

Although racing is the last thing that younger enthusiasts would associate the Fox Body with, the car was actually very active in multiple competitions. From the Zakspeed GTO machines, ASC McLarens, and across the Atlantic to Ford Europe’s DTM cars, the Fox Body was actually one of the most raced generations of the Mustang.

During the late 1970s the Blue Oval was also in the GTX (Grand Touring Experimental) class of the IMSA GT Championship, where it competed with heavily modified ‘Stangs dubbed - you guessed it - GTX.

In 1983, this class became obsolete as the competition’s governing body decided to replace it with the GTP (Grand Touring Prototype) category, which featured purpose-built racing machines similar to the ones participating in the FIA Group C overseas.

Ford wanted to continue racing in the new class, but it suddenly lacked the right car. Bob Riley and his team at Riley Technologies were commissioned with designing the new racer which would continue to use the Mustang nameplate.

Since its mass-produced siblings used front-mounted engines, Riley chose to go with this configuration (albeit moving the powerplant behind the front axle), even if neither Ford nor the MSA rules prohibited him from going with a far more efficient, mid-engine design.

The next step was building the chassis and bodywork, tasks that were handed down to Roush Performance, Protofab, and the Ford Aerospace Western Development Labs. Sharing absolutely nothing with the road-going Fox body, the GTP ‘Stang was built around a carbon fiber and Nomex composite monocoque, with Kevlar reinforcements in key areas. The structure had independent, double-wishbone suspension with Koni coilovers and adjustable sway bars on all four corners. Stopping power was provided by humongous, ventilated rotors and four-pot calipers.

Its body panels were also made out of carbon fiber, and the resulting car looked more like a competition-spec Corvette than a regular pony car. It had a 105-inch (2,667 mm) wheelbase and an elongated front section that hid its rabid motor.

Like the SVO version of its distant, street-legal sibling, the GTP was powered by a turbocharged four-cylinder, but that’s where the similarities end. The engineers chose an advanced version of the venerable Cosworth BDA, a proven race motor that traced its roots to the Ford Kent block of the 1960s.

A compact, lightweight 2.1-liter with 16 valves and dual overhead cams, it could produce around 600 hp, which was more than enough for the 1,770-pound (803 kg) GTP. All that power was sent to the rear wheels through a fairly conventional, Hewland VG5 five-speed manual.

Two GTPs made their debut at the 15th round of the 1983 IMSA GTP series, held on the Road America track located near Elkhart Lake, Wisconsin. With the 2.1-liter still in development, Ford ran the cars with an older, 1.7 BDA, but, much to everyone’s surprise, Tim Coconis and Klaus Ludwig’s GTP won the race with two laps to spare, while the other, shared by Bobby Rahal and Geoff Brabham crossed the finish line third. From that point on, however, things took a downhill turn. Both cars failed to finish the next race, and with Roush pulling out of the project because Ford didn’t allow them to run an in-house developed V8, only one car took to the grid for the season’s finale at Daytona. Raced by Team Zakspeed USA, Rahal and Ludwig’s GTP retired after 53 laps.

The 2.1-liter BDA was ready in time for the 1984 season, but a combination of bad luck and technical issues prevented the GTP from winning any races. In fact, things got so bad that the car only managed to finish one race during the whole season. In 1985, it was replaced by the mid-engine Ford Mustang Probe.

Even if it can be considered a failure of epic proportions, the GTP remains a fascinating part of the Mustang’s history. It was a weird, yet promising front-engine prototype with sound aerodynamics that could have been one heck of a prototype with better luck and a more reliable engine.

If you would like to know more about the GTP, we recommend watching the documentary below posted on YouTube by Marshall Pruett. 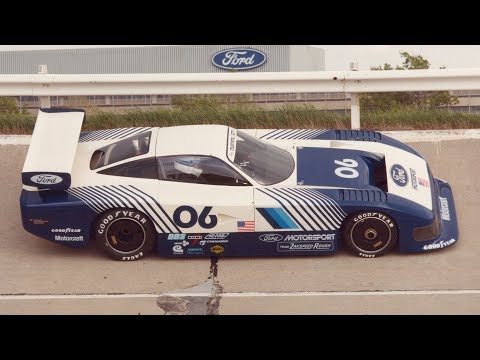