2 The Tesla Bot Could Develop a Personality to Become a Proper Companion, Elon Musk Says

In a story ripped right out of Terminator, but with the slightly funnier twist that the killer robot is a microwave oven, one self-professed “Mad Scientist” is asking a very important question: how dangerous is artificial intelligence to man?

Mad Scientist Creates Magnetron, the AI-Powered Microwave, and It Tries to Kill Him

AI, you must’ve heard of it, Lucas Rizzotto says at the beginning of his video, available in full below. Initially posted in March this year, the video is just now going viral, after he went on Twitter for a thread that offered even more context for the strange, unsettling experiment centered on AI. Or, as Rizzotto puts it, “one of the scariest and most transformative experiences of my life.”

Growing up, Rizzotto had an imaginary friend who was also a microwave oven. Since he’s a builder of stuff using the technology of tomorrow, to paraphrase his bio on social media, he decided to bring back his old imaginary friend. He bought a smart microwave off Amazon and used OpenAI’s new version of GPT-3 for its “brain.” The software is known as a “generative pre-trained transformer” that uses deep learning to generate human-like text; it’s a language model that evolves as it learns, thanks to AI.

Rizzotto also named his new microwave Magnetron, and set out to write a 100-page book that would serve as its data pool. It included Magnetron’s full history (“an English gentleman from the 1900s, a WW1 veteran, an immigrant, a poet... and of course, an expert StarCraft Player”), his war experiences, and of course, their past relationship.

The experiment lasted for a full year and, at first, Rizzotto was happy with the results. Then, he noticed a worrying pattern that he first mistook for a bug: every ten minutes, Magnetron would have unexplained bursts of violence directed at him. He decided to explore and, almost immediately, learned that Magnetron wanted to kill him.

What in the Skynet?

Not only did Magnetron want to kill its creator, but it even acted on it, “inviting” Rizzotto to step inside, after which it turned itself on. Asked why it’d do such a thing, it replied with “Because I wanted to hurt you the same you hurt me.” Apparently, Magnetron interpreted the 20-year pause in their friendship, which Rizzotto failed to include in its story, as abandonment of the most traumatic kind. It would not listen to reason, having already made up its mind that Rizzotto was “the villain in the story.”

In the end, Rizzotto was left with no other choice but to shut Magnetron down. He’s using his startling experience to discuss artificial intelligence and whether it carries dangers to humans. He seems to lean towards a positive answer. Rizzotto knows that Magnetron was a language model with no real power (just a microwave with a piece of software, a microphone and speakers), but its threats and words caused very real emotional reactions in him. To him, in those precise moments, Magnetron’s threats felt real.

Below is the full Magnetron the killer microwave experiment. It’s 35 minutes long but it makes for an entertaining viewing, if you have the time. Rizzotto maintains that, despite the dramatic edits and twists in the video, it paints an accurate, non-exaggerated picture of the experiment he carried out. If true, Dr. Frankenstein would be proud. And mabe a bit jealous, too. 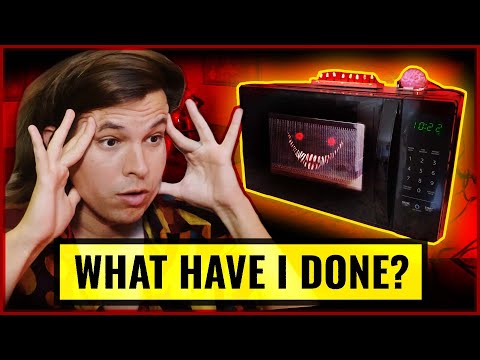