5 You Can’t Keep Rocket or Space Debris If It Lands in Your Yard in Florida
Car video reviews:
Coverstory

Honey, Bumble, and Queen are the cute names of three cubes that are only as big as 30 cm (11.8”), part of a robotic system developed by NASA. Although they typically perform various routine tasks in order to support astronauts on the ISS (International Space Station), a large-scale international project is researching their ability to help clean space debris in an innovative way.
6 photos

The German Aerospace Center (DLR) is leading the TumbleDock/ROAM project, with the main goal of finding the best way to safely remove hazardous pieces of debris from the Earth’s orbit. NASA is a partner in this complex project, as the developer and provider of the Astrobee robots. The software used to guide Honey and Bumble for this series of experiments was developed by the DLR Institute of Robotics and Mechatronics. MIT (Massachusetts Institute of Technology), another partner in the ROAM project, developed the control system for the chaser and the target satellite.

The chaser acts as the active spacecraft (represented during the experiment by Honey the Astrobee), while the target satellite is represented by the other Astrobee, named Bumble. The goal is to safely approach the defective satellite or the piece of debris, in order to grab it, so that it can be removed from orbit.

DLR is currently focusing on the two robots’ ability to operate independently, during the simulation of a spacecraft approaching a tumbling object. Basically, Honey (playing the role of the spacecraft) must be able to approach, grab and transport Bumble, which is playing the part of the target satellite. To do so, it must assess Bumble’s tumbling trajectory, position itself in the right way, and plan a flight path with no potential collisions. It can do all of that with the help of Artificial Intelligence (AI).

The first tests for this “orbital scenario” experiment were carried out in February, with DLR playing an important part in developing the software for the two robots. In the future, a robotic arm will be installed on the chaser spacecraft, so that it can capture the target satellite. But before that step, it must be able to approach it safely, and this is what the Astrobee robots are practicing.

The accumulation of debris around our planet is becoming increasingly dangerous, so projects such as TumbleDock/ROAM are essential for safe space operations in the future. 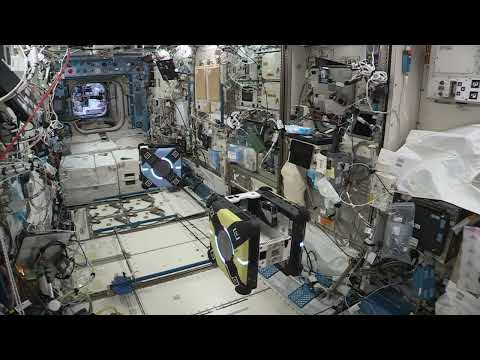