3 1970 Ford Torino GT Might Steal Your Heart With Laser Stripes, But Not the Wallet

While quickly associated with the C/K series of pickup trucks and currently with the Chevy Silverado and GMC Sierra full-size pickup trucks, the truth is General Motors’ Suburban nameplate is the record-breaking all-time longest continuously used model name in production.
36 photos

It has been around since 1934 (for the 1935 model year) and today it looks like one of the greatest ideas when trying to secure a bonkers amount of space for both your family and vacation luggage at the same time. Of course, alongside the Yukon XL, it also counts among the elephants in the china shops of the automotive world, if you ask some.

But having such an imposing figure is not always equal to aggressivity. Take a look at this GMT400-based (fourth-gen C/K series truck sibling) 1993 Chevy Silverado that sits lowered on massive Billet Specialties aftermarket wheels and looks like a two-tone fat SUV ballerina. And we mean that in the least derogatory turn of the phrase – kind of like talking to a kid who is sweet and innocent even after eating too much teal and tan candy…

Anyway, this eighth-generation Chevy Suburban has a little over 55k original miles (55,205 “actual miles,” which equate to 88,844 km) on the odometer and resides proudly in the inventory of Sherman, Texas-based PC Classic Cars. From there, it flaunts a subtle Teal and Tan original code U9828/L5400 paintjob while riding closer to the ground on staggered 20-inch front and 22-inch rear aftermarket chrome wheels.

The interior, meanwhile, has a monochromatic tan-influenced appearance and features perks such as powered steering and disc brakes, powered windows and locks, as well as comfort creatures like a rear defroster, cruise control, and tilt steering, among others. Under the hood, meanwhile, there is a ubiquitous 5.7-liter V8 engine and the 700R4 automatic transmission.

As for the asking price, surprisingly or not, that one is not as huge as the SUV itself. Instead, the classic car dealership is asking a mere $27,500 for this subtly customized, summer-loving SUV. 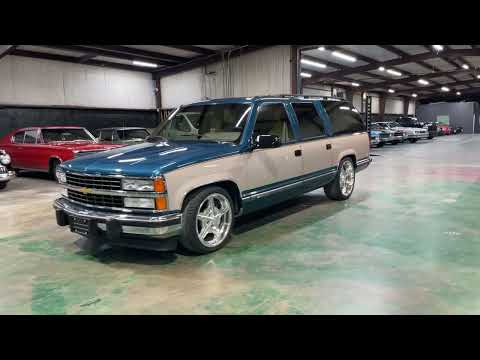