1970 Ford Torino GT Might Steal Your Heart With Laser Stripes, But Not the Wallet

Sometimes billed as the muscle car alternative to the Pontiac GTO, the Ford Torino would normally be pretty tame. Alas, the Blue Oval did give it a few ways to be proud of itself, such as the GT treatment.
39 photos

Usually, Torinos were pretty normal as four-door sedans and two-door hardtops but every now and then somebody would easily stand out in the muscle car crowd with stuff like the ultra-rare 1970 Ford Torino GT 429 Super Cobra Jet. Sure, this example, seen here in the inventory of Sherman, Texas-based PC Classic Cars, lacks the latter 429 Super Cobra Jet designation – but also the will to snatch an arm and a leg from its future owner.

And, even with an “older” Tan paintjob it still has the famous laser stripes, so it could be said that this Ford Torino GT still feels as Ginger as its interior, or as feisty as any other original M-code 351C-4V V8 engine-equipped car of the same age. Besides, the classic car dealership promises it “runs and drives great,” complete with an FMX three-speed automatic transmission, manifolds, a dual exhaust, and Flowmaster mufflers.

So, the classic laser stripes, along with the 14-inch Magnum 500 wheels, the Ginger cockpit with Rim Blow steering, and factory bucket seats will take care of the looks, while the 351ci V8 and its ‘accessories’ will take care of the sound and drive part of the equation. Thus, all that remains to be settled with the outlet would be the asking price for this example that shows 76,267 miles (122,740 km) on the odometer, right?

And while it is not going to be as collectible as a Torino GT with the 428 or 429 Cobra Jets, this unit could still shine brightly on a possible summer road trip adventures list by way of a sensible $36,500 quotation, if one would allow our two cents on the matter. 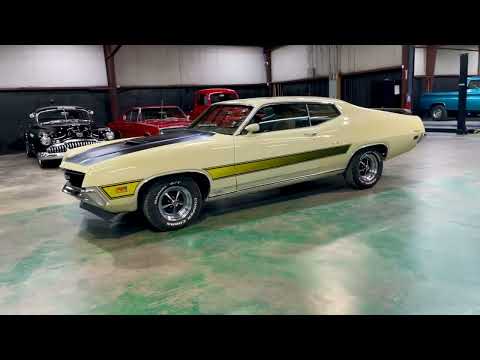