2 Ducati's MG-20 Proves That a Magnesium e-Bike Is Possible, It Also Folds Down

4 This Fat Bike Is Great for Off-Road Adventures. Foldable and Affordable, too

Cristian Curmei
Some people might be asking themselves, “What the heck do bicycles have to do with cars and motorcycles?” Well, Igogomi is about to show you what with its newest innovation, a chainless e-bike.
12 photos

If you’re asking yourself how a chainless bicycle works, there are several ways to go about it. However, Igogomi is experimenting with a slightly different style than you may have witnessed so far. The way Igogomi makes its bicycles chainless is by employing an automotive industry feature, the driveshaft.

That’s right folks, each bicycle Igogomi puts out is built around the same feature. Currently, three bicycle styles are offered on the manufacturer's website, but I've decided to choose their most expensive model to showcase what this team can achieve. That bike is the 36V Pro.

Because the Pro comes in at the highest price, we can assume it also features the best this company has to offer. $2,000 (€1,687 at current exchange rates) is what you’re going to need if you like what you see, but wait till you witness how it works. Just so you have an idea of what sort of e-bike this is, know that this team has received several design awards, including the sought-after Red Dot Award.

The way the drivetrain works, excluding the motor strapped to the front hub, is exactly as it would in your car. Along the would-be chain stay sits a driveshaft whose each end is lined with grooves or splines. These grooves then attach to a gear coupling in the bottom bracket and a similar coupling housed in the rear hub; you just pedal and go.

Whether this sort of system is a benefit or it just works and looks cool, we’ll soon find out. What you can immediately take away from this is that by eliminating the chain, you also eliminate a few issues that accompany them. At the same time, the driveshaft system may bring a few problems of its own too. You eliminate the chance of snagging or breaking your chain, but if your driveshaft breaks, you’ll be done for the day as you’ll have to take the whole bike apart.

Since Pro is an e-bike and does not include a mid-mounted motor, the team decided to place the motor on the front hub. With a 200-watt motor, the Pro can reach a speed of 16 mph (25 kph) maximum. There are also five assist modes to choose from. I can’t wait until this team throws the whole motor onto the driveshaft.

To power your motor and LCD display, the Pro obviously includes a battery. The question is, can you see where it is? Well, it’s housed in that wide segment of the frame, right above the bottom bracket. With it, you’ll be able to ride for up to 25 miles (40 kilometers) before needing to recharge. Speaking of recharging, you need to sacrifice four hours for a full charge.

One neat trick the Pro has up its sleeve is intelligent tilt detection. If the bike is tilted more than 10 degrees to the left or right, the motor automatically shuts off to prevent a possible injury. Headlights and taillights are also in place to help make you visible at night.

Because the bicycle is intended for inner-city and urban use, it’s also able to fold. With this feature, the Igogomi team made sure its bike falls into as many hands as possible. After all, you can fit it in an elevator, the trunk of a car, and even on a bus or train.

Now the bike uses an aluminum frame and magnesium alloy rims, but fully equipped with motor, batteries, and driveshaft, you’re looking at a 66-lb (30-kg) beast.

As I was saying at the beginning of this article, the border between bicycles, motorcycles, and cars keeps growing ever fainter. In the next few years, I bet things are going to be a whole lot of fun for all these industries. I can’t wait to see a mid-mounted driveshaft e-MTB! 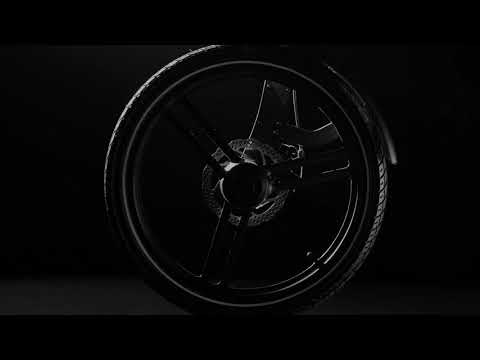