1 This Fat Bike Is Great for Off-Road Adventures. Foldable and Affordable, too

3 Go for Uphill Thrills with Husqvarna’s Mountain e-Bikes, Now Coming to the U.S.

If unicorns of e-biking exist, this is one of them. The A20F is the latest electric bicycle from ADO (A Dece Oasis, a Chinese company with headquarters both in the U.S. and Europe). It comes with incredible claims of being the world’s most affordable foldable fat-tire e-bike of the moment, which makes it the perfect companion both for city and off-road riding.

In short, here is a foldable fat-tire bike that promises you the best of both worlds: a bike that is lightweight and nimble enough for the daily commute, yet sturdy and competent for rough riding outside of the city. To boot, it comes at half the price of similar offerings, thanks to the current crowdfunding campaign on IndieGoGo.

Of course, most crowdfunding campaigns promise some sort of revolutionary and likewise unicorn-y product. It’s called marketing. This isn’t a direct dig at ADO or this particular bike, but more of a general warning to not take crowdfunding campaigns at face value and exercise caution when or if you decide to back them.

In theory, the A20F is the ideal, all-road solution to many urban transportation problems. With a larger section of city-dwellers turning to two-wheel solutions for their daily commute, e-bikes have emerged as a favorite. Despite rolling on massive 20x40-inch fat tires, the A20F is sleek enough for city use. As a bonus, it’s foldable, which means you can easily store it in a cramped apartment, take it up to your office, or on public transport. At 75 pounds (34 kg), it’s described as incredibly “lightweight,” but this is actually standard weight for mid-range e-bikes: not too heavy to become impractical, but far from lightweight.

The three-point folding mechanism allows folding in under 10 seconds, with the bike collapsing at nearly twice its length. The frame is aluminum alloy, patented and tested for durability. The battery, hidden in the tube, is removable, so you can further take some pounds off the frame when you have to carry it up one or more flights of stairs.

Speaking of battery, it’s a 36-V/10-Ah Li-ion battery that’s good for up to 50 miles (80 km) on a single charge in pedal-assist mode and up to 25 miles (40 km) when riding on motor only. A full charge is achieved in 4 to 6 hours, ADO says in the product’s description. There’s the option to purchase a backup battery for extended range, or you can trust your own strength and pedal as you would a traditional bike should you run out of juice. The 7-speed Shimano transmission is meant to make the task easier for you.

ADO offers two motor options for the A20F, the 500 W version and the 250 W model for European countries (the latter has a top speed capped at 15.5 mph/25 kph). Either comes with two riding modes, Off-Road Mode and Quick Dynamic Mode, allowing riders to choose power assistance according to preferences and riding terrain. There’s also the adjustable fork suspension for a smoother ride across bumps and rugged terrain, an integrated headlight for improved visibility, dual disk brakes for stopping power, and regen braking.

As for being the “most affordable” e-bike of its kind, the A20F does come with certain caveats. This title only applies if you back the campaign as a super early bird, in which case you get it for as little as $899, which is 30% off the MRSP. Perhaps just as importantly, the price doesn’t include taillight, fenders, or racks, so you have to consider these, too, if you want the complete package.

“We have […] developed A20F with the goal of offering the coolest but also most affordable e-bike, all packaged in a bold, record-breaking design,” ADO says. Offered in diesel black and glacier white, the e-bike is scheduled for an August 2021 delivery. That’s when we’ll see if it lives up to the hype. 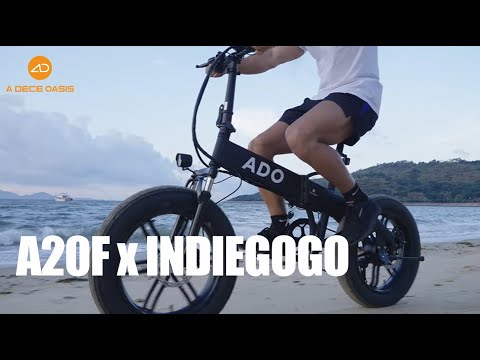