1 Before the New Model S, These Cars Had the Most Eccentric Steering Wheel Designs

2 Elvis Presley Owned This 1967 GMC Pickup Truck, Now It Can Be Yours

3 1944 Messerschmitt Bf 109 Once Rained Death from Above, Now Entertains

5 Messerschmitt Once Made Nazi Fighter Planes, and Then This Funky Bubble Car
Car video reviews:
Coverstory

One of the most iconic microcars ever to be built, the Messerschmitt Kabinenroller (KR, for short) is coming back. We get both a modernized take on the original KR-200 with an internal combustion engine and an all-electric version of the same. How’s that for feeding your need for retro automotive design, as well as an unspoken desire to live on the edge?

The Messerschmitt KR was the microcar / bubble car Messerschmitt produced after World War II, when it was no longer allowed to build aircraft due to its contracts with the Nazis in the previous years. It was a three-wheeler that was produced for the next couple of decades and that proved to be a success. Back in the day, people believed microcars to be the future of personal transport but they were also incredibly popular because they were cheap to make and maintain and, why yes, totally skirted safety laws.

The reason three-wheelers never went mainstream is because they’re notoriously unstable, while microcars continue to remain at the outer edge of automotive design in terms of on-the-road safety. So, depending on how much you’re willing to sacrifice in the name of nostalgia, the new Messerschmitt KR could be the thing for you.

Messerschmitt Werke is bringing back the KR, based on the iconic KR-200 (hat tip to New Atlas), in two variants. The KR-202 Sport version is basically the iconic KR, but with improved features and the extra options of adding a hardtop, electric heating, AM/FM/Bluetooth radio, and a chrome luggage rack. The maker uses the phrase “waterproof limousine” when describing the hardtop version of this microcar, which is definitely a stretch, but it does help with conveying the message. The KR-E5000 is the electric variant.

The KR-202 Sport is powered by a 7.3-hp 125cc one-cylinder engine mated to CVT automatic transmission, and delivers speeds of up to 56 mph (90 kph). The electric variant has a 5,000 W motor (6.7 hp) that also maxes out at 56 mph (90 kph), but comes with a considerably reduced range of 50 miles (80 km), whereas the ICE version can take you up to 100 miles (160 km) on a single tank of gas. And you have to wait between four and six hours before being able to hit the road again with the electric version.

Both models are incredibly light – lighter than the original model on which they’re based, given improvements in design. The KR-202 Sport weighs 485 pounds (220 kg), while the electric version tips the scales at a mere 430 pounds (195 kg). Both models have two seats in tandem and, according to the official description, can carry two adults and one child, and some luggage, for a total payload of 441 pounds (220 kg). Since there are only two seats in the microcar, one’s guess is that the kid would have to ride in the passenger’s lap, which brings a new dimension of unsafe to the equation.

“All the fun costs only a fraction of the price of what an original costs today,” Messerschmitt Werke says in the official description. That much is accurate: original Messerschmitt KRs are, these days, incredibly rare to come across, let alone in a decent condition, which drives up prices. 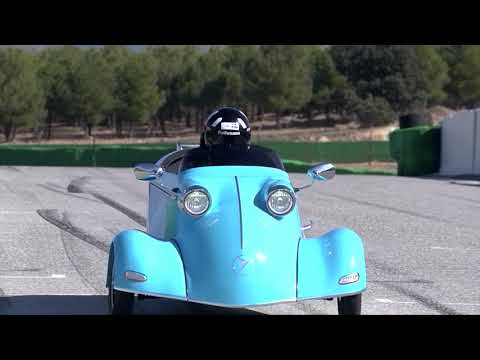