5 How to Choke on a Nut, Die and Get an Audi e-tron GT for Free
Car video reviews:
Up Next

Jeep Trackhawk Ain't Impressed by the Lamborghini Aventador, Puts It in the Obituaries

Hyundai's all-new Ioniq 5 is already available on the market, and that means that the pre-production prototypes of this model have ended their career. With that in mind, the Koreans have come up with something – turning an Ioniq 5 into an air purifier.
30 photos

It was all for a commercial, and the production company behind the ad made a big show out of the whole thing. A team of specialists dismantles the Ioniq 5 to its last bolt and then proceeds to create something out of selected components.

While watching the latest commercial from Hyundai, some of us were reminded of Honda's iconic Cog commercial. In a way, this new advertisement, called Rebirth, is somehow the reverse of that commercial that made history in its day. By the way, the Honda Cog commercial is still a reference in today's advertising world.

To be fair, the commercial seen here includes a fair bit of CGI, unlike the Cog, which did not. In today's world, CGI is fine in commercials and movies as long as the quality of the graphics is on par with the rest of the footage.

Once completed, Hyundai made what could be the world's most expensive and heaviest indoor air purifier. While it is unclear if it is any good, it does work with the cabin filter, but using the vehicle's cooling fan and one of its alloy wheels may not be the best solution for an air purifier.

Regardless, the point of the advertisement was not to show how to turn an Ioniq 5 in an air purifier but to consider the second life of every device that you make, buy, and use.

If everybody on Earth drove zero-emission vehicles starting tomorrow, we would still have a significant pollution problem caused by single-use plastics, fast fashion, planned obsolescence in electronics, and improper disposal of clothes, electronics, and other products.

On a more positive note, we do appreciate the ingenuity behind this commercial. Unless being placed in a museum or donated to schools, these pre-production prototypes are crushed. 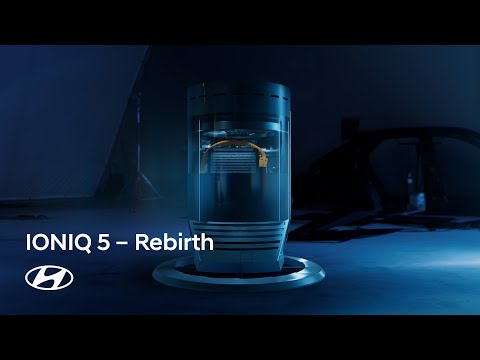