The Korean carmaker introduced the second generation of its electric Ioniq 5 model at the beginning of 2021 with a CUV-like appearance and a stunning design.

Ioniq 5 was based on the Hyundai 45 EV design study and resembled the 45 years brand's history. It was built on the E-GMP platform that brought a longer wheelbase and featured a more muscular appearance. The sci-fi design and angular-sculptured side panels paved the way for a Korean carmaker's new design language.

Hyundai's first car on the market was the 1975 Pony designed by Giorgetto Giugiaro, and the 2021 Ioniq 5 took its inspiration from that model. At the front, the clam-shell design continued to minimize the grille and pushed the company's logo on the hood. From its sides, the huge wheelbase for its car category led to a spacious interior.

Inside, Hyundai took the minimalist design to a different level. The dashboard was divided into an upper and lower section, with just a few buttons on the center stack. There was a 12" TFT display for the instrument panel in front of the driver and, in the middle of the dash panel, an additional 12" screen for the infotainment system. Both of them were mounted on a shared board. The front passenger's seat featured a foot-rest to enjoy more comfort on longer journeys. There was room for three passengers in the rear, and, thanks to the completely flat floor and the 3.0-meters (118") wheelbase, they all had enough legroom.

The carmaker offered the 2021 Ioniq 5 with two power options. Customers could choose between a rear-engine, rear-wheel-drive solution or two motors (one on each axle). Also, the carmaker offered two battery options. Another important innovation was the electric system, which allowed high-voltage and high-power charging stations of up to 800 volts. 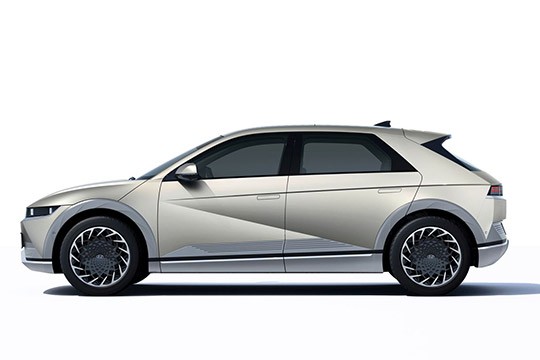