1 Australian Automaker Holden Phased Out, GMSV Will Replace It

4 Holden Ute Reviewed in California by Doug DeMuro: Yes, It's as Cool as You Think

The Ute is a car Americans have to make themselves, with a grinder and hammer, because for some reason, we don't deserve a modern El Camino. On the other side of the world, Australians are also deprived of their beloved car-based pickups, and we decided to do a little tribute for them.
3 photos

Modern Australian car tastes are now a mix of European and Japanese. They're now into efficient four-cylinder motors, small crossovers, and even hybrids. But back in the day, local sheep farmers didn't have a lot of money and needed something that was both a work truck and a family car.

Holden, the Australian division of General Motors, offered these iconic vehicles that could do pretty much everything. In one area, the modern ute is better than the American truck, and that's performance/handling. Underneath the skin, you'll find the VF Commodore Ute has things in common with the Pontiac G8 or the Chevrolet SS.

It's got some nice sedan-like independent rear suspension and could have been ordered with powerful V8 engines as well; you could also get them with superchargers. These little mullets were like Corvettes designed to transport sheep.

Designer Hugo Silva decided to do this little Commodore Ute tribute by slamming one to the ground on some Rotiform wheels. It is just a rendering, of course, but it's also a nice reminder that you can have a Ute in America and build it like what you see in the picture. Sounds impossible, right?

The 25-year law that stops you from having that sweet R34 is also in the way here, but there's a workaround. You get the Pontiac G8 we mentioned, and that's basically a rebadged Holden Commodore sedan. Then you import a Ute body from Australia; they're made on the same platform, so you can marry the chassis body that you can legally own to the imported body and have something that's legal to drive in the United States. For more details, check out what an expert on the matter has to say about this (in the video). 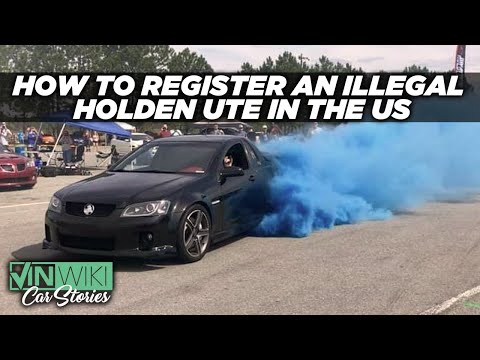