The 2013 Holden Commodore Sedan was the facelifted version of the fourth generation of the Australian large vehicle.

The refresh brought a decrease in its base price and added more features.

The exterior look was upgraded with a new design for the grille, headlights and the front bumper. Even in the lowest spec version, the Evoke received a sportier look for the bumper, with a wide and short air intake in the middle and two other on it sides. Behind the front wheels, there was an air-extracting scoop for the wheel well. It was equipped with standard 16” alloy wheels.

Inside, the Commodore was loaded with features such as an 8” display for the infotainment system. It had Bluetooth connectivity and navigation. It also featured a parallel parking system that could spot and turn the wheels to help to park.

There were three engine choices and two gearboxes available for the 2013 Holden Commodore. There were two V6s on the offer and a V8. The 6-speed manual was fitted as standard on all the models while the 6-speed automatic was an option. 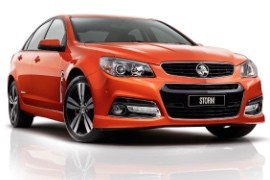