After the switch from the European Opel platforms to former Daewoo-based platforms, the small vehicles from Holden made an appearance in 2011 with the sixth and last generation of the Barina.

It was available as a 5-door hatchback and a four-door sedan. In 2016, a facelift was meant to bring more fresh appeal to the aging Barina (known in Europe as the Chevrolet Aveo).

It dropped the sedan version and the only body available was the 5-door hatchback with one engine available: a 1.6-liter gasoline with 116 hp and 155 Nm (114 lb-ft) of torque. The previous RS version, with a 1.4l turbo and 140 hp was dropped as part of the facelift process. On the exterior, there are new headlights, with clear lens and daytime-running-light enclosed. The front bumper was redesigned and received a chromed margin for the main venting grille and for the foglights.

The facelifted version went on sale in Australia at the end of 2016, bringing a revised exterior, an updated MyLink infotainment system with Apple CarPlay and Android Auto. The ANCAP (Australian equivalent of the European EuroNCAP for crash-testing cars) gave a 5-star rating for the small Korean vehicle. But this was not enough to improve its sales and the sixth generation of the Barina was axed, along with the 30 year-old nameplate. 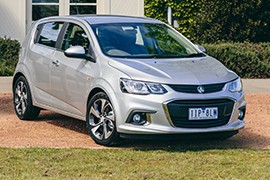