The Holden Ute was the most practical muscle-car produced in Australia, and its stance and taxation made it a favorite among the petrolheads from there.

Unfortunately, all good things must come to an end, and the Ute was doomed after GM's decision to shut down the model just a few years later after it introduced the last generation of this outrageous pickup. In 2015, Holden dared to make the vehicle as a farewell to its customers.

The Ute was based on the same platform as the latest VF platform used for the Commodore lineup. It sported a new front fascia with rounded, angled headlights and a big hexagonal "mouth" in the lower bumper area. A pair of side vents provided air to cool the front brakes and enhanced the car's aggressive look. Behind the short, two-door cabin, Holden installed a covered bed good to carry things. But don't think of the Ute as a regular U-haul vehicle.

Inside, the European style dominated the dashboard and its binocular instrument cluster. The infotainment system featured a 7" touch-screen above the center stack, like in Holden's European cousins (Opel and Vauxhall). The aluminum inserts (silver plastic) and the thick steering wheel completed the car's sporty image, while the high-bolstered seats kept its occupants in place during hard cornering.

Under the hood, Holden offered a choice of two engines for the Ute. While the small, 3.6-liter version was for those who didn't want to tear up the tarmac, the 6.2-liter LS3 under the SS version was clearly the one that turned heads on the streets. 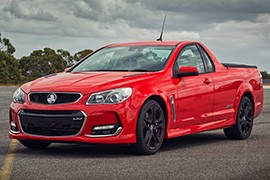