Holden refreshed the Caprice/Statesman lineup for the 2010 model year and gave the car a punchier engine while also changing bits and pieces to enhance the car's look.

The Australian arm of GM was still a frontrunner in its country, but the brand's days were numbered. Since its sales were limited to a relatively small area, it couldn't evolve. That led to slow sales, despite the carmaker's efforts to make it profitable. Despite sharing the same old platform carried over from a European sedan from the mid-80s, the Caprice/Statesman was still a comfortable vehicle, especially on long journeys.

On the 2010 Caprice/Statesman was easy to notice the chromed trim around the grille, flanked by a new set of headlights. These also discretely accommodated the washers hidden under black caps within the headlamps trims. On the sides, the long blinkers from the front fenders were unique on the market. Also, the profile revealed a svelte silhouette, with soft lines and long rear doors that eased the ingress and egress to the back seats.

The luxurious interior boasted Nappa-wrapped seats and leather trims everywhere on the steering wheel, gear selector, and handbrake. Thanks to the wood trims spread around the dashboard, door cards, and center stack, the car created a luxurious ambiance fit for top governmental officials. Part of the standard features was also the infotainment unit with ten speakers. In the back, the bench was wide enough to fit three people inside, although the transmission tunnel was quite high. Yet, it was no problem for just two occupants.

Under the hood, Holden installed the latest evolution of the 3.6-liter V6 engine paired to a six-speed automatic transmission. For those in a hurry, the carmaker added an option for a 6.0-liter V8. 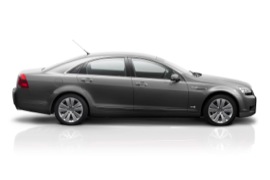