2 Wave's Latest 50-Ft Catamaran Was Designed to Turn Heads, Has a Unique Layout

Otilia Drăgan
The maritime industry is focusing more and more on clean energy alternatives, such as solar and wind power, as well as on sustainability. This adventurous man did it all by himself, starting with “saving” an old boat that looked unusable, ditching the engine, and slowly turning it into a fossil-free home on water.
16 photos

It doesn’t get more “off-grid” than living on a solar-powered boat, taking out the dinghy for a ride into the wild, and catching fish for dinner. At least, that’s what Simon Stiles says. You’d think that someone who has traveled for years across North America on a van and then done the same thing on a motorcycle would have already quenched his thirst for adrenaline and freedom. But that was just the beginning of an even wilder adventure.

We’ve shared the stories of many people who decided to live full-time on sailboats, especially because of the pandemic. Most of them went for the best boat that they could afford, changed a few things here and there to make it more comfortable, then took to the sea. That’s because they were eager to start traveling as soon as possible.

But Simon was in no hurry. He has been working on his boat while living onboard. It’s been years, and the process still isn’t complete, but for him, this is a labor of love and a life lesson, not just some trendy escapade. He’s not able to sail away just yet, but the “Old Dog” can cruise comfortably around the Strait of Georgia area.

In a 2021 Exploring Alternatives feature, Simon said that he was staying on Gabriola Island, between Vancouver Island and the British Columbia mainland, because that’s where he had purchased the boat, and that it turned out to be the perfect spot for an off-grid lifestyle.

It looked like a wreck, and few people would have been willing to pay even CAD $5,000 ($3,900) for it. The 47-foot (14.3 meters) boat was gathering dust, sitting in the same port for 12 years. But it had a glorious past, having crossed the Pacific three times, and it was a sturdy build. “Old Dog” was a Wharram Oro 47 catamaran-style boat, inspired by Polynesian canoes, dating back from 1976.

James Wharram was a pioneer himself. In 1953, when he designed his first off-shore cruising catamaran, the term itself was barely used. That was the beginning of James Wharram Designs, a Cornwall-based company that creates double-canoe style sailing catamarans, all inspired by the traditional canoes of the Pacific. Boats such as this Oro 47 are part of the first range of Wharram cats, designed between the ‘60s and the ‘70s, now considered classics.

Simon shared every step of the renovating process with his followers from the moment he first got his hands on Old Dog. He also had to learn many different skills because he wanted to do everything himself, which made the process more affordable and also more sustainable. Replacing the keels, pulling pounds of paint off of it, replacing the deck – these were just some of the things that Simon had to do.

Some criticized him for getting rid of an engine that was functioning properly, but Simon was determined to go fossil-free. According to him, using solar panels and lithium batteries is much more affordable today than a few years ago. Plus, when he will eventually be ready for some longer voyages, he doesn’t want to be limited by a fuel tank.

Old Dog now boasts 16 solar panels of 330 W each and an HP EV AC 12 kW motor. The 5,280 W of solar power, plus almost 20 kW hours of lithium battery power, are enough to power everything Simon has on board, including an induction stove, a water-maker, and a washing machine, plus cruise faster than 3.5 knots (4 mph/6.4 kph).

During the summer, he gets enough solar power to cruise for 50 km (31 miles) across the Georgia Strait. But, of course, it’s not always sunny, which is why Simon intends to also use wind power to balance things out. He recently fitted the boat with telescopic masts and is currently working with sailing experts to design custom sails – after about 4 years, he’s no longer doing everything himself because so many people and brands wanted to support his project.

Quite unexpectedly, the galley takes a big chunk of the space at the center of the boat because Simon loves to cook. So, he didn’t mind if there was little space left for everything else – a cozy lounge area, four tiny berths, one bathroom, and two cockpits. Heat comes from a stainless steel wood stove which he also built on his own but hopes to replace with an electrical pump. Also, Simon was probably one of the first to have installed Starlink on his boat – an impressive step up for an old boat that had been abandoned for years.

Even if Old Dog is still not complete, it’s one of the most amazing and inspiring water crafts out there. It’s got a bit of everything – history, clean power, modern technology, sustainability. Simon’s ongoing off-grid adventure truly proves that it’s not about the destination but about the journey. 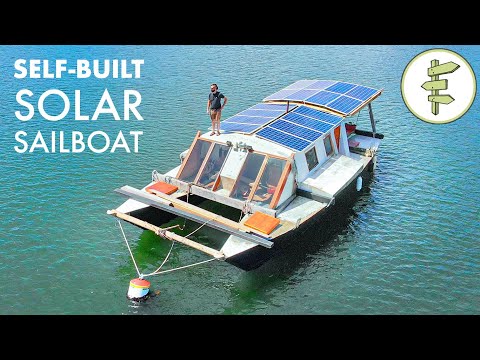