1 Have Outboard Motor and Frozen Lake, Will Spin on the Ice Carousel

3 Mariah Carey Goes to the Drive-Thru, and It’s Exactly What You’d Expect

5 Blowing Up Your Tesla Model S With 66 Lbs of Dynamite Is a Strange Form of Protest
Car video reviews:
Coverstory

Some people will do anything for clout, from eating detergent pods to selling jars of bathwater, staging fights and all sorts of drama, to pretending to lead a more glamorous life than they do in reality. Ok, that last part is actually the standard on social media, if you call yourself an influencer slash vlogger.

We can now probably add another thing to the very long list of strange things people will do for clicks: crash a plane. This is what former Olympian turned vlogger and full-time daredevil Trevor Jacob is accused of doing on November 24, 2021. In a video posted one month later, simply titled “I Crashed My Plane,” Jacob explains how he came to crash a small plane in the Nevada mountains, during what should have been a short routine flight.

The problem is, few are buying his story – least of all the Federal Aviation Administration (FAA), which is currently investigating the crash. To put it differently, it is widely believed that Jacob crashed the plane on purpose, just so he could build a dramatic story around it, involving his parachute jump from the malfunctioning plane, his hours-long hike through the bushes, and his late rescue by a group of farmers.

It all started innocently enough, with Jacob outside a 1940 Taylorcraft at the Lompoc City Airport in Santa Barbara County. The plan, he says, is to fly to Mammoth Lakes, California to skydive, paraglide and spread his late best friend’s ashes. Jacob climbs into the plane alone and takes off without incident. The plane is rigged with three cameras, one on the wing, one on the tail and another right in front, aimed at Jacob. Jacob himself has a selfie stick with a camera.

Some 20 minutes into the flight, the engine cuts off and never starts again. Jacob opens the door and looks outside a couple of times, and then jumps. As luck would have it, he’s wearing a parachute because, he says later in the video, he’s always wearing one when he’s flying, out of an abundance of caution (except that this is the first time he’s wearing one). He lands in the bushes, and the pilot-less plane crashes at a distance, and Jacob is left stranded for the rest of the day, slowly and painfully making his way through the bushes until he eventually comes up a passing car and is rescued.

His story is riddled with holes, and other certified pilots, skydivers or just regular people with a keener eye for details have taken notice. If this was a mission to scatter a friend’s ashes, the decision to rig the plane with cameras makes no sense, since this was a short, routine flight. Equally senseless is the fact that Jacob doesn’t try to restart the engine, nor does he seem to even consider gliding the plane to a landing spot nearby. There is no camera feed in the cockpit, and the door is strangely open even before the supposed engine malfunction.

The FAA has also taken notice of these suspicious facts, The Independent reports. Despite the disclaimer at the onset of the video, Jacob did not alert the FAA and the NTSB “immediately,” but actually tried to gather a team to go and retrieve the plane from the crash site in secret, several days later.

Landing the plane was never even considered, sources at the small airport tell the publication. In fact, the plane shouldn’t have been in the air in the first place, because it was “in a state of disrepair and in need of major maintenance.” “Jacob attempted to complete a few fixes on his own” but was well out of his depth, the sources say.

To make a very long story shorter, it definitely looks like Jacob staged the engine malfunction and the subsequent crash for clout. Given his connections and his experience as a skydiver, it wouldn’t have been that difficult to pull off, either. But neither will save him from the consequences, if it’s determined that he faked it.

The FAA wouldn’t comment on the ongoing investigation, and neither would Jacob, who has disabled the comments on the video. Before you proceed to check it out, this needs to be said: faking plane crashes for publicity is in very bad taste. Also, illegal. 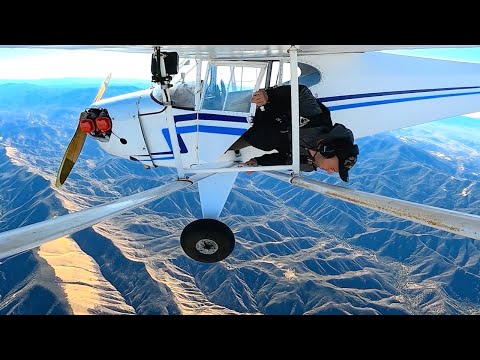