2 Toyota 1UZ-FE: The Over-Engineered Gem That Became One of the World’s Most Reliable V8s

4 A Comprehensive Look at the Legendary Toyota 2JZ Engine

If you’re not from Japan, you probably never heard about the Toyota Century. Since the late-1960s, the luxury sedan has been the manufacturer’s flagship car for the domestic market, and from 1997 to 2007, it was powered by the company’s only series-production V12.

Forgotten by Many, the Toyota 1GZ-FE Was Japan’s First and Only Mass-Produced V12

Before we delve into the details about the twelve-cylinder, let’s get to know the car it was intended for. It all started in 1967 when Toyota introduced a new full-size luxury sedan that was built to celebrate 100 years since the birth of its founder, Sakichi Toyoda.

The embodiment of Japanese culture and engineering excellence, the Century became the vehicle of choice for members of the royal family, high-ranking government officials, and the country’s most illustrious businessmen. It was continuously improved for the next 30 years, getting its first major redesign in 1997.

By that time, Toyota had grown into one of the biggest names in the automotive industry, and no expense was spared for the development of the new Century. In appearance, it was not as lavish as a Maybach or a Rolls-Royce. However, it was just as flawless, comfortable, and high-tech.

Unlike the first generation, which was based on an existing model (the Crown Eight), this variant was designed from scratch, and almost every component was specifically conceived for it. While the body featured nothing particularly impressive, things were different under the hood.

Engineers were tasked with developing a smooth-running and efficient unit that would also deliver an unprecedented level of reliability. So, rather than building on the successful recipe of the Lexus LS400’s 1UZ-FE V8, they cooked up Japan’s first mass-produced V12.

At first glance, the 5.0- liter, all-aluminum, 48-valve, quad-cam mill is nothing special, yet Toyota made a name for itself by over-engineering the heck out of its powerplants, and this one was no exception.

The reinforced block was designed with a 60-degree angle between the two banks and was fitted with forged steel, fully counterweighted crankshaft held in place by six-bolt mains. The architecture of both the block and the crank was inspired by the silky-smooth 1UZ-FE’s race-derived bottom end. The conrods were asymmetric and made from forged steel, while the pistons were constructed from aluminum alloy.

In many ways, this engine was a combination of two six-cylinders that shared a common crank. It had dedicated left and right bank intake manifolds, independent throttle bodies, and fuel injection systems. Each bank was controlled by a separate ECU, enabling the 1GZ-FE to completely shut down one of the banks in case of a major failure and continue to run on the other six cylinders.

However, this unit was bombproof and never broke down. In fact, it turned out to be one of the most reliable ever produced because it was tuned to deliver far less power and torque than it was capable of.

When it was released, Japanese manufacturers were still abiding by the gentleman’s agreement of the mid-1970s that limited output to 276 hp. That being said, the 1GZ-FE was rated at – yes, you guessed it! Exactly 276 horses. At 355 lb-ft (481 Nm), the maximum amount of torque it could send to the rear wheels was good for a V12 that wasn’t built for a sportscar. Moreover, it was attainable at 1,200 rpm, so the 4,520-lb (2,050 kg) of the Century was by no means sluggish.

What the engine lacked in terms of power it more than made up in terms of smoothness. In a previous article, I discussed how the 1UZ-FE was put to the test by the Top Gear crew during a 1990 episode: a glass filled with water was placed on top of the valve cover, and the liquid barely moved when the engine was revved up to its limit. Well, according to Toyota, the Century’s V12 exhibited 10% less vibration than the LS400’s V8, which is quite amazing.

The powerplant showed its true potential once Japanese petrolheads began to swap it into their custom rides. Because of its dual-ECU design, it was a pain in the behind to modify, but eventually, people began to develop custom setups. In many cases, the twelve-cylinder was bored out, fitted with 2JZ internals and custom heads (among other goodies), and could easily spit out between 500 and 600 hp.

Of course, some didn’t settle for three digits and proceeded to add a twin-turbo kit to the mix. One such speed addict is Kazuhiko “Smokey” Nagata, the founder of the Japanese tuning company Top Secret and the man behind arguably the most famous Mk IV Supras of all time. Equipped with a pair of HKS GT 2835 turbochargers, the Top Secret Supra’s thoroughly modified 1GZ-FE produces no less than 1,000 hp. You can see the insane car in action below, in a video posted on YouTube by That Racing Channel.

Officially, it was only used in a JDM luxury sedan, and it was grossly capped in power for increased reliability and smoothness. However, the 1GZ-FE was an engineering masterclass that, in my opinion, deserves more recognition. 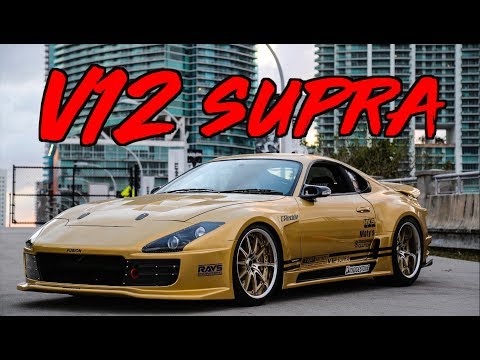