1 The History of the Iconic HEMI: From Experimental Aircraft Engine to the 426 Elephant

3 Remembering the Alfa Romeo Busso V6, One of the Best-Sounding Engines Ever Built

5 1956 Jaguar XK140 OTS SE With 210 HP Looks as Though Time Had No Power Over It
Car video reviews:
Coverstory

Today, Jaguar is a subsidiary of the Indian conglomerate Tata Motors that builds some luxurious, yet mostly boring vehicles. However, back in its independent days, the brand was responsible for some of the most exciting roadworthy and racing machines of the era, many of which were powered by the glorious XK straight-six.

The origins of the British marque date back to 1922, when two motorcycle enthusiasts, William Lyons and William Walmsley founded the Swallow Sidecar Company. In the following years, they started developing bodies for passenger cars in addition to motorcycle sidecars, and by 1935, the business, renamed S.S. Cars, introduced the first in-house developed sedan. In 1936 a two-seat sports car named S.S. Jaguar 100 hit the streets, but as the Second World War started three years later, vehicle manufacturing ceased, and the S.S. moniker took on a far more sinister connotation. This lead to a rebranding of the company which became Jaguar Cars in 1945.

During the second global conflict, work at the Foleshill factory in Coventry revolved around repairs of Whitley bombers and manufacturing sidecars or trailers for the armed forces, but chairman William Lyons didn’t give up on his original business. In absolute secrecy, he tasked the engineering team led by Bill Heynes with developing a new series of engines that would help revive the company after the war concluded.

As the British Isles were being bombarded by Nazi forces, Heynes along with his fellow engineers Walter Hassan and Claude Baily were assigned fire-watching duties. It was during these long hours spent on the factory’s roof where the groundwork for the XK engines was laid out.

As soon as the war ended and the company was rebranded, the engineering team began refining two prototype units that they had covertly built during the last two years.

One was a four-cylinder intended for smaller-sized sedans, while the other was a six-cylinder that would serve as Jaguar’s flagship engine. The latter showed more promise and it benefitted from the bulk of the development work in the years that followed.

The aim was to create a powerplant that could be not only reliable, but also powerful enough for a sporty sedan that could achieve a top speed of 100 mph (161 kph). To achieve this, the engineers employed innovative design features such as hemispherical combustion chambers or dual overhead camshafts (DOHC), a layout that was rarely used on mass-produced engines at the time.

Jaguar now had the powerful, smooth-running engine that they had envisioned, but the sports sedan it was intended for was far from finished. For the 1948 London Motor Show - which started a little over a month after the final form of the engine was ready - the manufacturer surprised everyone when it unveiled a gorgeous two-seat roadster called XK120.

Hastily conceived as a testbed and show car for the new engine, it was an instant hit, with both the public and the press praising its exquisite design, a reaction that encouraged Jaguar to begin a production run later that year. By the early 1950s, the XK120 was one of the most popular sports cars in the world.

The XK six-cylinder was praised for its smoothness, unmistakable sound, and raw power. In May 1949, on the empty Ostend-Jabbeke motorway in Belgium, a slightly modified XK120 achieved an average high-speed run of 132.6 mph (213.4 kph), a feat that made it one of the fastest mass-produced sports cars on the planet back then. It would go on to break numerous world records for speed and distance, becoming highly successful in race car form and boosting Jaguar’s sales in street-legal guise.

In the mid-1950s, the company finally abandoned the development of the four-cylinder XK, since engineers couldn’t attain the same smooth-running results of the six-cylinder. This was a major problem since plans for a compact sedan were well underway. The solution came in the shape of a smaller displacement inline-six built around a shorter block. This new version which made about 112 hp using twin Solex carburetors became the heart of the new model called Jaguar 2.4 Litre (later designated Mark 1).

By the early 1960s, Jaguar made significant improvements to the engine, developing a wide range of race-spec components that could be ordered through the company’s dealership networks. It also offered no less than five individual heads, most of which were color-coded and provided distinct performance upgrades.

In many instances, owners who used their Jaguars for racing bored out the 3.8 to 4.2 liters (256 ci.), a modification that led to significant performance gains. This practice eventually translated into the last major factory upgrade of the XK.

Introduced in 1964 and based on a redesigned block, the 4.2-liter would become the longest-serving and widely used version of the iconic six-cylinder. Although by now the industry had caught up in terms of technological advancements and the hemispherical chambers or the DOHC layout became widespread, the venerable powerplant was still going strong.

Both the 3.8 and the 4.2 were the engines under the hood of the E-Type (XK-E for the North American market), unquestionably the best production vehicle Jaguar has ever built. Output was identical, standing at 265 hp and so was the 0 to 60 mph (0 to 97 km/h) acceleration times of 6.4 seconds, but the 4.2-liter attained max power earlier in the rpm range, meaning much better throttle response. This made the E-Type one of the fastest production cars of the 1960s and combined with its excellent chassis, exquisite styling, and affordable price, it also became one of the most popular vehicles of the 1960s, especially in Europe.

In the late 1960s, all other displacement versions were discontinued, meaning that the 4.2 was the only remaining XK until 1975 when a revised 159-hp 3.4-liter was introduced. Both versions were beginning to be heavy and underpowered when compared to newer engines, but the XK’s reign was far from over. Jaguar continued to use it in most of its models, including the cars it marketed under the British Daimler brand (acquired in 1960). It soldiered on as a Jaguar motor until 1987 with the XJ6 being the last model to feature it but continued to be manufactured for the Daimler DS420 Limousine until 1992.

Conceived in the 1940s, they produced for 43 years, the XK six-cylinder is one of the most successful engine designs in history and one of the few automobile units that has seen a production run spanning over six consecutive decades.

Although the British manufacturer has created much more powerful engines throughout its history, the XK will be remembered as the best. It was used by the C-Type and D-Type race cars that helped Jaguar win five out of their seven Le Mans titles. Furthermore, it was the engine that made the XK120 and E-Type some of the best sports cars of the 1950s and 1960s, a period when the company thrived.

Thanks to YouTube user Tedward, you can hear how a 1954 version of the XK sounds in the video below. 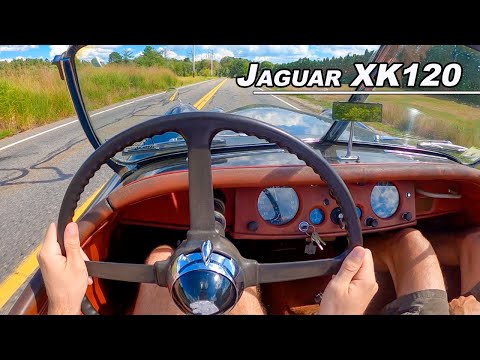